The regular European Gold Forum run by the Denver Gold Group ran last week, and is a show I enjoy travelling to Zurich each year to attend, despite the high costs of doing so!

This year, because of the covid-19 virus, the conference was run entirely online, and to my surprise it worked very well, with no technical hitches. Here are my thoughts. 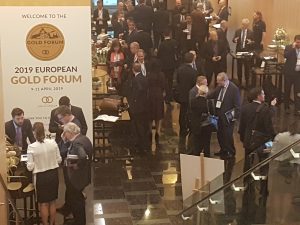 The regular European Gold Forum run by the Denver Gold Group ran last week, and is a show I enjoy travelling to Zurich each year to attend, despite the high costs of doing so!

Over the years I have learnt the financially painful lesson of staying somewhere where I need to rely on a taxi to attend the forum, and now stay close by, and either walk to the venue, or take the tram from the main station.  A short taxi ride in Zurich can easily cost £30 plus, each way, so it’s often cheaper to pay more, and stay closer. There are reasonable hotels, but it’s a question of booking at the right time to ensure the best rate.

Putting aside the breathtaking costs of taxis in Zurich, the event itself is first class, well organised, in a quality hotel, with adequate room for lectures and one on one meetings, and the catering is simply superb. I attend many well run conferences around the world, but the European Gold Forum is the premier one in my opinion.

This year, because of the covid-19 virus, the conference was run entirely online, and to my surprise it worked very well, with no technical hitches. Obviously I would prefer one to one meetings to be the preferred option, rather than over face time, but this year we were forced to do it that way and it was fine, even if you weren’t meeting the person face to face.

The meetings still had focus and engagement, but what was missing were the evening drinks sessions where you can have informal chats with people, particularly those CEO’s where you have an investment, or are considering making one.

The other downside for me personally was that  I missed meeting the Swiss investors I know, they are really nice people, and I always enjoy meeting them over a glass of wine.  Likewise the German group, another nice bunch of guys.

So the format was simple, each delegate had his own dashboard to log in to, and then there were a number of options, the main one being the schedule of meetings, with company name, time, and a connect button.

Five minutes before the scheduled time, the connect button would change colour, and once clicked, added you into the virtual room, where you could see the company participants and introduce yourself.  It worked perfectly, all meetings started on time, some early even , and a slide deck was used so you could see the slides with the CEO speaking in the background, which was fine.

One slight difficulty was that you were meeting people in Vancouver that had just woken up, due to the  8 hour time difference, it was funny seeing the darkness outside their windows. In one meeting the CEO was in Jersey with sunshine visible outside, and the IR guy was in a gloomy room in Vancouver, and his windows were pitch black.

I met a mixture of companies I already hold shares in, and a few new ones:

A new investment for me and the first time I have met management. Very impressed with their presentation, and I topped up my holding afterwards. Financed to production, and a resource upgrade is due soon, so a catalyst to buy before that is announced, and I am looking to add on any dip. The stock traded well and rose 40% during the conference, so obviously others likes the story as much as myself!

Another recent investment for me, and again a first introduction to management. Again very impressed, management are experienced and have built mines before. The project timeline will slip a couple of months due to the virus, but first production should occur within 10 months.

A well run company, in production, and making money, if only they weren’t in Zimbabwe!  They do not get the recognition they deserve in my opinion, entirely because of their jurisdiction, which is a huge shame as Mark Learmonth has run this company well through some difficult times.

I met Jim McDonald again, and the story is still fine, better long term prospects in fact, but I don’t feel the need to rush out and buy the stock in a hurry, despite me liking silver so much.  A wait and see at this point but if silver runs there may be more urgency to buy at that point, in my view.

My focus at the moment is producing or near to production gold producers, but I took this meeting because they are in Serbia, have some huge potential copper projects, and are partnered with giant companies like JOGMEC of Japan, who pay for the exploration costs if they buy in. Run by CEO Teo Dechev, a lovely Bulgarian lady living in Canada, Mundoro is one for the watchlist for sure.

Very impressive recent performance, top performing small royalty/streaming company for well over a year.  Nice presentation, but Eric Sprott has loaned them some money at 10% interest, and that puts me off a bit to be honest. Sprott as a largish shareholder may try and influence which deals they do is my fear, though that probably isn’t the case, just me being careful.

Twice the size of Ely, but this company has been growing for 17 years, and has an impressive pyramid of assets from royalties already being received, through development stage projects, early stage exploration, and a raft of projects available for sale or option.

I was impressed by the project portfolio, and the fact they have grown organically rather than by using financings and debt like Ely. I am considering investing, this is growing steadily, rising 300% over the last five years, which is impressive in my view.

Mexico based, GGD have a producing silver tailings project in production and producing enough revenue to cover the company’s running costs, plus to make a small contribution to their exploration costs. They have a high grade exploration project, Los Ricos, located in Jalisco state, northern Mexico.

I like the model of running small scale production to cover costs, and if the silver price rises a couple of dollars, that will make a decent contribution to exploration costs too.

I also Met Palladium One, but felt they were too early stage for me, as gold is where the action is now and there will be time to invest in startups once the gold run is over, whenever that might be.