I attended the recent 121 Mining Forum held in London, which was the best of their conferences held in London so far in my opinion.

121 Mining conferences were established a few years ago by Pablo Martin and some fellow former Mines and Money colleagues, who designed an original concept of holding face to face meetings in individual booths, instead of the conventional trade show scenario where people amble round aimlessly and conduct ad hoc conversations, without any real structure. 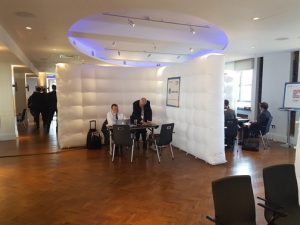 I attended the recent 121 Mining Forum held in London, which was the best of their conferences held in London so far, in my opinion.

121 Mining conferences were established a few years ago by Pablo Martin and some fellow former Mines and Money colleagues, who designed an original concept of holding 1 on 1 face to face meetings in individual booths, instead of the conventional trade show scenario where people amble round aimlessly and conduct ad hoc conversations, without any real structure.

At the time they decided to leave Mines and Money, at the bottom of the mining sector slump, and with other conferences struggling for both exhibitors and delegates, it looked a very brave decision, (I thought foolish) yet they have prevailed and become the leading conference in London now.

The concept of holding a conference where there was a structure of face to face meetings, in inflatable ‘igloo’ style booths was original, and at their first conference I immediately liked the focus and engagement of the meetings.

The original venue, at the side of Fenchurch St. Station, was ridiculously hard to find, as the road was so small it didn’t show on some phone maps, including mine.  This was exacerbated by the venue not allowing any signs for the conference on the exterior! Many people commented they had missed their first meeting because the location was so hard to find.

Once inside though, the ambiance was good, the layout of the open spaces and catering areas, as well as the presentation room, all fitted together nicely, and provided quite an intimate atmosphere.  There were three ‘igloo’ areas where the companies were, and the whole event went off very well indeed.  At the end of the conference I compared my experience to the normal one of endlessly circulating around booths looking to connect with people, and realised this approach was going to be a winner.

I have noticed the decline on the numbers of listed mining companies presenting at Mines and Money, and the increase at the 121 Forums, and it comes as no surprise to me. Mines and Money serves a purpose, it’s really a trade show rather than an investor  conference, in my opinion. For people wanting to connect and engage with the CEO’s of companies, 121 enables that, whereas the trade show approach doesn’t.

The 121 Forums became so popular they outgrew Fenchurch St, which was a shame because we all at least knew how to find it now, having learned the hard way!  They have made the move to the old GLC Building, (made famous by ‘red Ken Livingston in the 80’s) at the side of the River Thames alongside Waterloo Station.

So, due to the larger space available, the recent conference, had over 100 companies, a record for the event.  I’m sorry to say I did not like the venue at all, due to the layout, and groups of companies being spread too far apart. One had to allow several minutes to walk between meetings at opposite sides of the venue, and with a tight meeting schedule, this  resulted in meetings running late.

I felt the intimacy of the Fenchurch St. venue had been lost, there were several food stations, and as a result, several networking areas, making it hard to find people you might want to engage with. This was a real negative for me, but the only one.

The group of companies was large and diverse, and I was able to meet several new companies and hear their story, as well as listen to the presentations of a few old favourites during gaps in the meeting schedule.

I think it appropriate that I mention the organisation of the event. From arrival until departure the staff were simply first class, with a welcoming smile, and very helpful throughout. Charlie Hastings has the unenviable task of organising all the meetings, and making running changes, and does all that with a smile on his face and a nothing is too much trouble attitude.

I use tried and trusted staff for all my events, and 121 have clearly realised that is the way to go, rather than simply hire in some unknown hourly paid help for an event. Staff that care make a difference!

In conclusion, 121 has come of age, a good conference, interesting companies, superbly managed, and most certainly is the the best mining conference in London now, in my honest opinion.

It will be interesting to see how their competitors respond, if indeed they do of course. 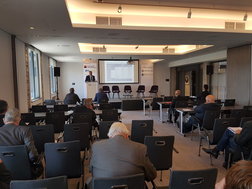