As you would expect a mining show organised in Germany was run efficiently from start to finish.

Upon arrival at the somewhat remotely located Munich Tram Museum, the entrance is simple and informal, you pay 10 Euros, and you enter, no badges, no third degree ID checks, no fuss, just a friendly smile from the receptionist as you pay, and you’re in. 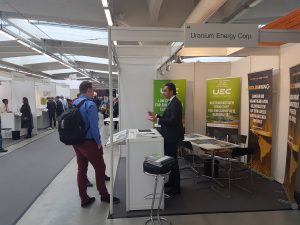 Amir Adnani of UEC and GoldMining Inc. in discussion with with an investor at Munich 2018.

As you would expect, a mining show organised in Germany was run efficiently from start to finish.

Upon arrival at the somewhat remotely located Munich Tram Museum, the entrance is simple and informal, you pay 10 Euros, and you enter, no badges, no third degree ID checks, no fuss, just a friendly smile from the receptionist as you pay, and you’re in.

Upon entering, the entrance hall always has German investment booksellers on both sides, and whilst the titles are all in German, it’s not hard to understand them, “dollar crash”, or many references to “Geld” (gold). These stalls are always very popular and one imagines they must make a good trade during the show if there is a reasonable ratio of lookers to buyers.

Once into the main hall, the room opens out and the main presentation room is on the left hand side, and straight ahead is the booth area in tow aisles.

The Munich show is unique in that not only do you have company booths but mixed in with them are bullion dealers selling gold and silver coins. This mixture adds a lot of interest, I would defy anyone to pass by without checking out the coins on display.

The show was laid out well, and very few trams remained inside due to the higher number of booths this year. The venue is easy to navigate, with wide corridors, and having two food points at opposite ends helped keep queues down.

This show is unique in that at the end of the first day the organiser himself, Jan, accompanied by various lovely ladies kitted out in mining gear haul round a trolley and distribute bottles of beer to the booth holders. A quick dash into a friendly stand ensures a bottle of Germany’s finest beer handed to you with a smile by the best looking miner you’re ever likely to meet!

Moving on to the attending companies, there were a few familiar faces from the companies we cover, as well as some excellent new stories, some of which we hope to present in London in due course.

Our good friend Amir Adnani had a booth representing both of his companies, UEC (Uranium Energy Corp.) and GoldMining Inc. {TSX.V: GOLD} With the uranium price rising some 50% during 2018 Amir was beaming and stated that he had strong investor interest at the stand over both days. Both companies have a good number of German shareholders.

Talking to Amir, he is naturally very pleased with the increase in the uranium spot price and sees uranium as possibly the next ‘hot metal’, as previous favourites such as lithium and graphite are fading in popularity now. Each metal seems to take it in turns to be the favourite, and uranium must be at the front of the queue now after so many years.

I spent some time talking to Philippe Cloutier, CEO of Cartier Resources {TSX.V: ECR}, and it was good to see him so upbeat, and with good reason. Philippe skilfully guided ECR through the lean years, running the company frugally and minimised dilution.  The company changer for Cartier occurred when Agnico Eagle made their strategic $5 million investment, giving ECR the resources to go and drill their Chimo property.  As a result of Agnico coming onboard, JP Morgan and other large institutions became investors in the company.

It’s worth noting that Agnico’s standstill agreement with ECR comes to an end at the end of the year, so we may see some corporate activity afterwards!

Another company that has been carefully guided through a brutal market for juniors is Radisson Mining {TSX.V: RDS}, and Hubert Bouchard was happy to talk about the recent changes, that have seen a cornerstone investor buy in to the company with a significant initial investment, and an experienced new director appointed, with the skill to drive their drill plan forwards, thanks to the extra cash now available.

Finally, the management for Mineworx {CSE: MWX} were in attendance and were happy to talk about the significant progress they have made since their visit to London. They have now fully assembled their equipment are in the process of testing before full production commences. I like to see companies achieve their stated objectives, and Mineworx have certainly done that since their visit last year.

Due to the nature of their process, I.E. being a tech company and not actually mining, they were disappointed at the footfall at their booth on Friday, so I hope that improved on Saturday.  At the end of the day, if they are producing gold, who cares how it’s produced if it’s legal, environmentally friendly, and makes a profit?

The show remained busy until around 4pm, when everyone seemed to leave all at once, and some booths were taken down early, a practice not allowed in Canada.

The taxi ride back to the airport was an eye watering £70, but due to the remoteness of the venue, the alternative taxi plus excruciatingly slow train ride of one-hour costing over £30, it seemed the lesser of two evils!

Overall Munich is an excellent show, and I look forward to future events.

Some companies that caught my eye, in no particular order, were:

There were a few other companies I liked that I would like to present in London next year, and after reviewing them I will mention them later.