Intends on completing by the end of 2018 its feasibility study leading to the implantation of the first ever all-electric open-pit mine.

The results of this study will serve to confirm the project’s economic viability and to determine how best to exploit the graphite deposit of Saint-Michel-des-Saints in a carbon-neutral way to meet the NMG’s sustainable ambitions. 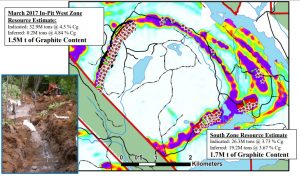 Montreal, Quebec — Nouveau Monde Graphite (NMG) {TSX.V: NOU} intends on completing by the end of 2018 its feasibility study leading to the implantation of the first ever all-electric open-pit mine. The results of this study will serve to confirm the project’s economic viability and to determine how best to exploit the graphite deposit of Saint-Michel-des-Saints in a carbon-neutral way to meet the NMG’s sustainable ambitions.

An International Team of Experts : The Task Force Committee.

Prior to launching this all-electric project feasibility study, last Fall 2017, NMG brought together an international team of experts: The Task Force Committee (TFC), recognized worldwide for their knowledge and expertise: ABB Inc., Doppelmayr Canada LTD, Met-ChemCanada Inc./DRA, Medatech Engineering Services Ltd and SNC-Lavalin Inc. “Members of the TFC work together closely and intensely. This has led us to upgrade the initial project as presented in the pre-feasibility study (see press release issued October 25, 2017), by integrating existing electrification technology solutions. In doing so, NMG will obtain an all-electric effective mining plan without jeopardizing the forecasted profitable exploitation” explains NMG Chief of Operations, Karl Trudeau. Upon completion, the TFC as well as NMG’s in-house team have come to the conclusion that an all-electric project offers equivalent global economic viability while proposing a significant improvement on social and environmental levels.

Click to watch a video about the TFC’s work

“  The feasibility phase that we are embarking in is the next logic step of NMG’s development plan. By going forward with the all-electric concept, we intend on demonstrating that NMG can grow by choosing eco-energetic solutions, already put at use by major international suppliers, while respecting deadlines and budgets. Electricity is a clean energy source. It is abundant and easily accessible on our deposit located one the Matawinie property. This prompts us to consider the viability of a carbon-neutral project that meets our profitability goals,” adds Éric Desaulniers, President and CEO of NMG.

In December 2017, NMG published a pre-feasibility study forecasting a yearly production capacity of 52,000 tonnes of concentrate for a 27-year-pit exploitation. The feasibility study has commenced and has been entrusted to Met-Chem/DRA. The Montreal engineering firm will lead the study and the integration in conformity with the Regulation 43-101 Standards of Disclosure for Mineral Projects (NI43-101).  SNC-Lavalin Inc., ABB Inc. and SGS Canada Inc. will also be beseeched for this feasibility study.

The scope of the mandate includes the following tasks:

The feasibility study will be completed by the end of 2018. Certain seasonal issues of the feasibility study such as geo-technic drilling and specific sites’ condemnation drilling have already been conducted. Health and security issues as well as environmental protection will be included in the conception criteria of our infrastructure and operations. The industry’s leading technological solutions and engineering concepts will be put to use and the mining site’s and demonstration facility’s footprint will be reduced to its minimum. Two innovative concepts will also be introduced to our feasibility study: the co-disposition of mining residues and an all-electric exploitation.

A social and environmental impact assessment study (S&EA) has also begun. This study is conducted as part of the meridional Quebec environmental impact evaluation and examination procedure of the Ministère du Développement durable, de l’Environnement et de la Lutte contre les changements climatiques (MDDELCC). In February 2018, NMG has received the directive of the Minister to complete this study. The study scope includes the description of the environment base-line (or the initial environment prior to the project realization), the description of the project and of its components, based on the feasibility study, the impact analysis, the identification of attenuation measures or compensations, the preparation of an emergency plan as well as surveillance and monitoring programs. The completion of this study has been confided to SNC-Lavalin. It will be conducted in full consideration of all authorities responsible and in respect of the principles of sustainable development. Its realization includes many consultations activities with the hosting communities.

About our International Team of Experts

ABB Inc. (http://new.abb.com/ca) : ABB (NYSE: ABB) is a pioneering technology leader in electrification products, robotics and motion, industrial automation and power grids, serving customers in utilities, industry and transport & infrastructure globally. Continuing a history of innovation spanning more than 130 years, ABB today is writing the future of industrial digitalization and driving the Energy and Fourth Industrial Revolutions. As title partner of Formula E, the fully electric international FIA motorsport class, ABB is pushing the boundaries of e-mobility to contribute to a sustainable future. ABB operates in more than 100 countries with about 136,000 employees.  About ABB in Canada: In Canada ABB has a strong history of over a hundred years of Canadian innovation and the company continues to expand and localize its offerings for customers. With its Canadian corporate headquarters in Montreal, ABB operates close to 50 facilities and employs approximately 4,000 people across the country.

Doppelmayr Canada Inc. (https://www.doppelmayr.com/en/) : This international company, specializing in the transport of ore by aerial conveyors in difficult terrain and conditions, will supply NMG with ore handling solutions (RailCon® technology). This technology will be combined with a pit crusher; this mixed avenue will minimize ore transport from the pit to the ground surface.

DRA-Metchem Canada Inc. (http://www.met-chem.com/fr/) : The Met-Chem division of DRA Americas, is a consulting engineering company, headquartered in Montreal, and provides a wide range of technical and engineering services. Met-Chem is well-recognized for its capabilities in graphite, mining, geology and mineral processing and has a talented team of engineering, technical and project management personnel. DRA is a multi-disciplinary global engineering group that delivers mining, mineral processing, energy, water treatment and infrastructure services from concept to commissioning, as well as comprehensive operations and maintenance services for the mineral resources, water, agriculture and energy sectors. DRA has offices in Africa, Australia, Canada, China, and the United States. Initially in charge of NMG’s pre-feasibility study, this world-leading mining engineering firm will supply all the mandatory mining plan and mine operations recommendations. DRA/Met-Chem will also lead NMG’s feasibility study.

Medatech Engineering Services Ltd (https://medatech.ca/): This Ontario-established company has already been successful in converting many industrial equipment used in underground mines and pits and for civil engineering needs to all-electric full-functioning machinery.

SNC-Lavalin Inc. (http://www.snclavalin.com/en/index.aspx) : Founded in 1911, SNC-Lavalin is a global fully integrated professional services and project management company and a major player in the ownership of infrastructure. From offices around the world, SNC-Lavalin’s teams provide comprehensive end-to-end project solutions – including capital investment, consulting, design, engineering, construction, sustaining capital and operations and maintenance – to clients in oil and gas, mining and metallurgy, infrastructure and power. On July 3, 2017, SNC-Lavalin acquired Atkins, one of the world’s most respected design, engineering and project management consultancies. This prominent engineering firm will conduct studies and establish a detailed design of mining residue co-disposition. The firm will also look over the completion of our social and environmental and social impact assessment study.

Geologist and mining exploration expert Éric Desaulniers founded Nouveau Monde Graphite (NMG) in 2012. In 2015, thanks to the innovative use of 3D geodesic modelling technology, NMG discovered two major and high-quality graphite deposits on its Matawinie property, located in Saint-Michel-des-Saints, 150 km north of Montreal, Quebec. NMG then stepped out of its exploration phase to enter an era of development, having secured financial support with prominent venture capitalists and bankers.

On October 25, 2017, NMG revealed the results of its pre-feasibility study, independently conducted in accordance to the Regulation 43-101 Standards of Disclosure for Mineral Projects The study proved the high graphite content and quality and showed the industrial exploitation potential of the deposit located in the West Zone of its property. Having secured $13.7 M, during the Summer of 2018, NMG plans on operating a demonstration facility with a capacity to hold up to 1,000 tonnes of graphite concentrate flakes a year. The two-year project’s goal is to produce and characterize various forms of graphite to meet the needs expressed by potential industrial clients. All the while, NMG will finalize investments and start working on the development of an open-pit mine and the creation of a treatment facility capable of producing 52,000 tonnes of concentrate a year. Both the mining operation and the plant will be fully electric.

Finally, in a vertical integration and sustainable development perspective, NMG has begun planning the establishment of a large-scale graphite secondary transformation facility. This will cater to the ever-growing popularity and use of lithium-ion batteries and would be the only existing manufacture of its kind in North America.

Our team at NMG has more than 40 years of recent experience with graphite. NMG develops its projects in the utmost respect of the neighbouring communities while favouring a minimal ecological footprint. NMG has many direct accesses to labour and needed infrastructure for its operations, such as an abundant source of affordable and renewable hydroelectricity.