Has commenced drilling on its Malartic property situated midway between the towns of Val d’Or and Malartic, Que., and 12 kilometres from the Canadian Malartic mine.

Following the completion of the summer drill program at East Cadillac, one drill rig has been mobilized to the Malartic property, to expand existing zones along strike and at depth. 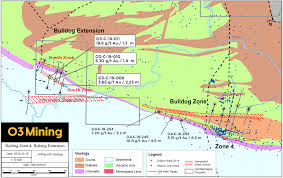 O3 Mining Inc. has commenced drilling on its Malartic property situated midway between the towns of Val d’Or and Malartic, Que., and 12 kilometres from the Canadian Malartic mine.

Following the completion of the summer drill program at East Cadillac, one drill has been mobilised to the Malartic property to expand existing zones along strike and at depth and to explore regional targets. The drilling will focus on the extensions of the Orion 8 (historic production of 22,252 ounces gold at 5.82 grams per tonne), Gold Hawk, Malartic H, North Shear and North-North zones located near the Marban deposit, where the company is currently conducting a preliminary economic assessment (PEA). Additionally, regional targets around Marban will be tested. Approximately 30,000 metres out of the 150,000-metre drilling program has been allocated for the Malartic property.

“The Marban project is a very important asset in our multimillion-ounce portfolio,” said president and chief executive officer Jose Vizquerra. “To begin drilling the extension of Marban at Gold Hawk is a very important milestone, because we will be able to test the high-grade potential at depth and along strike. The positive results at Gold Hawk will positively impact our Marban project.”

Is located approximately three kilometres north of the Cadillac Larder-Lake break and contains the Marbenite, Norbenite and North shears that run west-northwest across the property over more than 10 kilometres. The mineralisation is mainly distributed along those shears and consists of quartz veining with disseminated pyrite hosted in iron-rich basalt and intermediate to felsic dikes within ultramafic flows. The Marbenite shear is related to the Marban deposit, the Gold Hawk zones and the Orion 8 zone.

The Norbenite shear is related to the Norlartic and the Kierens deposits and the North shear to the North zone. The property also hosts the down-plunge extension of the mineralisation related to the former Camflo mine. The mine infrastructure crosses the border of the Malartic property around level 2400, 800 metres below the surface and it has been mined out to a depth of 1,200 metres inside the property.

The Camflo mine operated from 1965 to 1992 and produced 1.65 million ounces Au at 5.8 g/t (Quebec Ministry of Energy and Resources). Historic intervals on the property have the potential to deliver high-grade results distributed in many mineralised zones.

The historical data reported here are believed reliable and accurate and compliant with industry standards. The qualified person has reviewed all reports from the area and has reported on historical results and data collected, compiled and reported on. O3 Mining has not verified the data and is planning an initial exploration program.

The scientific and technical content of this news release has been reviewed, prepared and approved by Louis Gariepy, Eng (OIQ No. 107538), vice-president, exploration, who is a qualified person as defined by National Instrument 43-101 — Standards of Disclosure for Mineral Projects.

O3 Mining, which forms part of the Osisko Group of companies, is a mine development and emerging consolidator of exploration properties in prospective gold camps in Canada — focused on projects in Quebec and Ontario — with a goal of becoming a multimillion-ounce, high-growth company.

O3 Mining is well capitalised and holds a 100-per-cent interest in a number of properties in Quebec (435,000 hectares) and Ontario (25,000 hectares). O3 Mining controls 61,000 hectares in Val d’Or and over 50 kilometres of strike length of the Cadillac-Larder Lake fault.