Announced its financial results for the six months ended June 30, 2019.

Management expects to generate limited revenues from Mineral Ridge until approximately Q4 of 2019 from residual but diminishing gold recoveries from the leach pads. 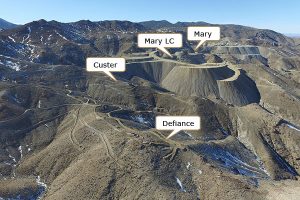 During the six months ended June 30, 2019, Scorpio Gold raised gross proceeds of $7.0 million from the issuance of secured subordinated convertible debentures by way of a private placement which allowed the Company to eliminate its $6 million senior secured debt with Waterton Global Resources Management in exchange for an upfront payment of $3 million in cash, and resulted in increasing the Company’s ownership of the Mineral Ridge Gold Mine from 70% to 100%.

The Company is now focusing its efforts on re-engaging with lenders who had previously expressed interest in funding the proposed new processing facility at the Mineral Ridge project. This new facility will allow the Company to capture the value in the gold reserves contained in the heap leach pad and unmined portions of the mine. The Company sees potential to increase those resources by further exploration within and outside the area of operations. The Scorpio Gold operating team at Mineral Ridge has proved its excellence over the past eight years and once financed, will build and operate the new processing facility with an expected mine life of at least seven years.

On June 6, 2019, the Company announced the commencement of drilling at its 100% owned Goldwedge property located in Manhattan Nevada.  The drilling program will focus on the Keystone-Jumbo claim block.  The program calls for drilling of up to 29 exploration holes with the intention of building on historic drilling and previously reported surface sampling results (December 15, 2016 news release) within the Keystone-Jumbo claim block.

On June 24, 2019 the Company announced the receipt and approval of its Water Pollution Control Permit (WPCP), issued by the State of Nevada, that will allow Scorpio Gold to advance its exploration activities at Mineral Ridge.

Management expects to generate limited revenues from Mineral Ridge until approximately Q4 of 2019 from residual but diminishing gold recoveries from the leach pads and will use cash flow from the operation of the Mineral Ridge along with current cash on hand to fund the Company’s operations until further financing is raised.

This press release should be read in conjunction with the Company’s condensed interim consolidated financial statements for the six months ended June 30, 2019 and Management’s Discussion Analysis (“MD&A”) for the same period, available on the Company’s website at www.scorpiogold.com and under the Company’s SEDAR profile at www.sedar.com.  All monetary amounts are expressed in US dollars unless otherwise specified. On April 15, 2019, the Company completed a 2 for 1 consolidation of its outstanding common shares.  All share and per share amounts are shown on a post-consolidated basis retroactively throughout this news release.

Scorpio Gold holds a 100% interest in the Mineral Ridge gold mining operation located in Esmeralda County, Nevada. Mineral Ridge is a conventional open pit mining and heap leach operation. Mining at Mineral Ridge was suspended in November 2017; however, the Company continues to generate limited revenues from residual but diminishing recoveries from the leach pads. Scorpio Gold also holds a 100% interest in the advanced exploration-stage Goldwedge property in Manhattan, Nevada with a fully permitted underground mine and 400 ton per day mill facility. The Goldwedge mill facility has been placed on a care and maintenance basis and can be restarted immediately when needed.

Scorpio Gold’s Chairman, Peter J. Hawley, P.Geo., is a Qualified Person as defined in National Instrument 43-101 and has reviewed and approved the content of this release.