The new drill results at one 3 constitute a new discovery, and include 1 metres at 7.9% zinc plus lead. 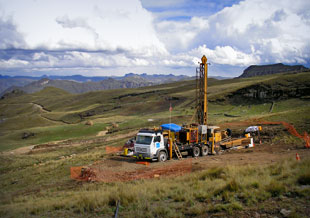 Drill hole A17-091A (previously A17-091, which was deepened from 480 metres to 625 metres depth) encountered massive sulphide replacements of the carbonate host rocks from 569 to 594 metres depth. An upper 10 metre interval intersected pyrite with significant zinc-lead-silver mineralization, while the lowermost 14 metre interval intersected significant tin-copper-silver mineralisation with massive pyrite. In addition, drill hole A17-100 has extended the known South Ayawilca zinc mineralisation by about 200 metres eastward, with mineralisation still open.

Dr. Graham Carman, Tinka´s President and CEO, stated: “We believe the new intercepts in drill hole A17-091A are very significant, as they open up the Zone 3 area for potential resource expansion in an area that has seen little drilling. The same magnetic anomaly that outlines the Ayawilca Zinc and Tin Zones continues into Zone 3, extending the prospective zone by hundreds of metres to the northeast. A drill rig will continue to operate in the Zone 3 area following-up on this exciting discovery. Drilling is now expected to continue well into 2018 without a break, other than for the Christmas period.”

Dr. Carman continued: “These holes are the first to be released following our zinc and tin resource update (see Press Release Nov 8, 2017). Already, new results are indicating that the project is likely to continue to grow with additional drilling. Drill hole A17-100 intersected 3 metres grading 9.1 % zinc in a 200-metre step-out hole from the resource at South Ayawilca. A large 750-metre gap remains undrilled between significant zinc intersections at South Ayawilca and Zone 3. While exploration drilling continues with the goal of expanding the project resources, we are concurrently working on de-risking the project through metallurgical tests of the two main styles of mineralization as well as beginning preliminary desktop mining studies. We look forward to providing updates on these programs as they progress.”

True thicknesses of the zinc and tin intersections are estimated to be at least 85% of the downhole thickness. Significant drill intercepts post the recent resource estimate are summarized in Table 1 with the strongest intercepts in bold text. Table 2 summarizes the drill collar information for the recent holes. 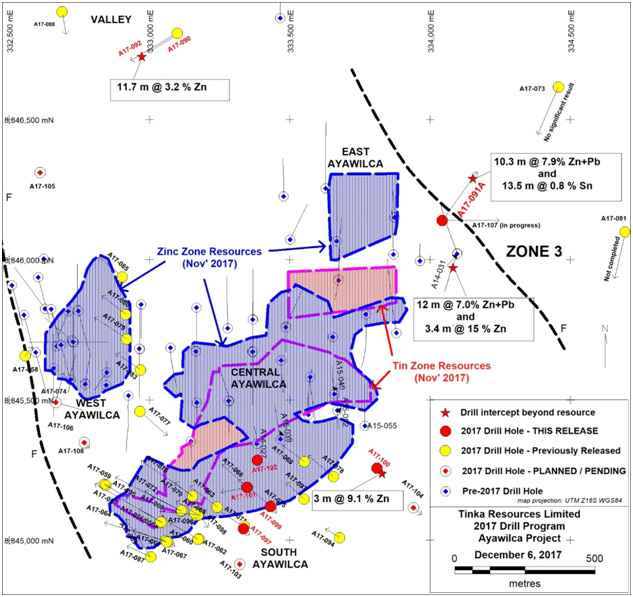