Provided details of its upcoming exploration drill program and an update on the preliminary economic assessment (PEA) for the Ayawilca zinc project in Peru. 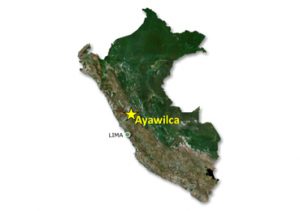 Tinka Resources Ltd. has provided details of its upcoming exploration drill program and an update on the preliminary economic assessment (PEA) for the Ayawilca zinc project in Peru.

Dr. Graham Carman, Tinka’s president and chief executive officer, stated: “The zinc zone resources at Ayawilca have quadrupled since the initial resource estimate in 2015 [see news release dated Nov. 26, 2018]. While the Ayawilca zinc zone resource is already large and high grade, we believe there is still more potential for growth. The upcoming exploration drill program will test for zinc mineralization in repetitions of the favourable limestone beneath the high-grade zinc resources, as well as provide valuable infill drill information within the existing shallow resources. Six drill holes, each to a depth of 600 metres, are currently planned at West, South, and Central Ayawilca. If successful, this deep drill program could add significant upside to the project.”

“The Ayawilca PEA is advancing as planned, with a top group of consultants managing engineering and metallurgical test work on behalf of Tinka. The PEA will provide a preliminary gauge of the economic value of the current resource at Ayawilca and we believe this study will be an excellent first step towards the ultimate development of the project.”

Drill program to commence at Ayawilca in April, 2019

A drill program is planned to test the potential for deeper, repeated zones of high-grade zinc mineralisation hosted by limestone beneath the current Ayawilca zinc resources (see news release dated Nov. 26, 2018). Tinka has begun preparations for drilling to commence in April, 2019, despite an unusually wet summer in the Andes mountains of central Peru. Repetitions of the limestone host have already been identified at West Ayawilca and Camp zones, often hosting very high-grade mineralisation such as hole A18-129 (10.4 metres grading 44 per cent zinc). A drill program of up to 10,000 metres is fully budgeted for 2019.

At least six holes, each to an average depth of approximately 600 metres, are planned to test for deep limestone-hosted zinc mineralization beneath the current resources at West, South, and Central Ayawilca. The drill program is not expected to have any impact on the timing of the PEA, which will be based on the mineral resources as at Nov. 26, 2018.

In 2018, two deep holes drilled at South Ayawilca improved the company’s geological understanding in an important way. Hole A18-152, drilled to a depth of 509 metres, intersected over 100 metres of limestone in a repeated unit beneath more than 100 metres of overlying phyllite. Although no significant zinc mineralization was found in this hole, the company believes that this limestone has the potential to be mineralized elsewhere at South Ayawilca, as it is at West Ayawilca (for example, in hole A18-129). Hole A18-133, drilled to a depth of 655 metres, did not intersect a repeated limestone but did intersect significant mineralization within a shear zone hosted by phyllite (0.3 metre grading 28 per cent zinc and 405 g/t silver from 506.2 metres depth), now interpreted to be the structural position of the repeated limestone in A18-152. This hole is not included in the current resource.

As announced by the company on Nov. 28, 2018, the PEA on the Ayawilca project is well under way. Wood (formerly Amec Foster Wheeler) of Lima, Peru, is engaged as lead consultant. Ken Engquist, an experienced engineer with very relevant recent experience for Tinka (including at Arizona Mining’s Hermosa project) has been retained to manage the PEA on behalf of the owner’s team. Engineering studies are advancing as planned. Metallurgical work is also under way on the tin mineralization, together with more detailed variability tests on the zinc mineralization. The PEA is expected to be completed by mid-year 2019.

Tinka will be participating in the upcoming PDAC annual conference in Toronto, Canada. PDAC is the leading convention for people, companies and organisations in or connected with mineral exploration with over 1,000 exhibitors, 3,500 investors and 25,600 attendees from 135 countries expected to attend. The company invites investors to come and meet Tinka’s team at PDAC, including its CEO, vice-president of exploration, and other members of its geological and investor relations teams. The company’s booth in the investors exchange is 2937.

Tinka’s CEO will provide a brief corporate presentation in room 803 in the south building of the Metro Toronto Convention Centre (MTCC) at 10:30 a.m. EST on Tuesday, March 5, 2019, as part of the zinc session. In addition, Alvaro Fernandez-Baca, Tinka’s VP of exploration, will deliver a technical presentation as part of the new discoveries and developments session in room 716 of the MTCC at 9:10 a.m. on Wednesday, March 6, 2019.

The qualified person, Dr. Carman, Tinka’s president and CEO and a fellow of the Australasian Institute of Mining and Metallurgy, has reviewed and verified the technical contents of this release.