Released the results of metallurgical testwork on composite zinc sulphide samples from the company’s 100-per-cent-owned Ayawilca property in central Peru.

Results have demonstrated that recoveries of 92 per cent zinc at a concentrate grade of 50 per cent zinc can be consistently achieved. 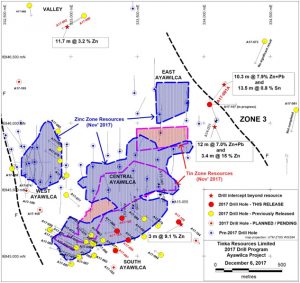 Tinka Resources Ltd. has released the results of metallurgical testwork on composite zinc sulphide samples from the company’s 100-per-cent-owned Ayawilca property in central Peru. The metallurgical test program was carried out by XPS Consulting and Testwork Services, Ontario, under the coordination of Adam Johnston of Transmin Metallurgical Consultants.

Dr. Graham Carman, Tinka’s president and chief executive officer, stated: “We are very pleased with the results of the metallurgical testwork, which has been completed to a high standard, as it predicts very high zinc recoveries from the mineralization at Ayawilca. We believe the Ayawilca zinc concentrate will be desirable for many smelters due to the low levels of silica, manganese and other deleterious elements, as well as for the high indium levels. We look forward to completing our PEA before the end of June, 2019. As the project progresses, we will continue to seek improvements in the zinc and lead metallurgy with additional testwork.”

A flotation development program was conducted to determine best conditions for high zinc recovery to a high-quality zinc concentrate.

The program focused on the South and West Ayawilca areas, which host approximately 50 per cent of the resource and most of the higher-grade zinc zones that would be mined in the early years. While the resulting composites were higher grade than the average diluted mining grades, it is believed that the samples were representative of the different mineral textures that will be encountered at Ayawilca, and were spatially representative of the South and West Ayawilca zinc zones, and therefore representative with respect to flotation performance. The results were used to develop the proposed flowsheet and reagent scheme that will be discussed in more detail in the upcoming PEA.

The results of the metallurgical tests have been reviewed and verified by Adam Johnston, FAusIMM, CP (metallurgy), of Transmin Metallurgical Consultants, Lima, a qualified person as defined by National Instrument 43-101. Mr. Johnston has 25 years of mineral processing experience and is a fellow of the Australasian Institute of Mining and Metallurgy .

Dr. Carman verified and compiled the technical contents of this release. Dr. Carman is a fellow of the Australasian Institute of Mining and Metallurgy and is a qualified person as defined by National Instrument 43-101.

Tinka is an exploration and development company with its flagship property being the 100-per-cent-owned Ayawilca carbonate replacement deposit (CRD) in the zinc-lead-silver belt of central Peru, 200 kilometres northeast of Lima. The Ayawilca zinc zone contains 11.7 million tonnes of indicated resources grading 6.9 per cent zinc, 0.2 per cent lead, 15 grams per tonne silver and 84 g/t indium and 45.0 million tonnes of inferred resources grading 5.6 per cent zinc, 0.2 per cent lead, 17 g/t silver and 67 g/t indium. The Ayawilca tin zone contains an inferred mineral resource of 14.5 million tonnes at 0.63 per cent tin, 0.21 per cent copper and 18 g/t silver (Nov. 26, 2018, release). A PEA is under way with results anticipated by the end of the second quarter of 2019.