Announced a potential dispute in their agreement with Central Iron Ore Ltd of Canada {CIO.v} relating to their acquisition of the Eureka Gold Project, WA.

CIO contend the deal includes Tyranna having to give them 14.4% of Tyranna stock as part of the deal, which Tyranna dispute, and are moving to instigate legal proceedings in Australia. 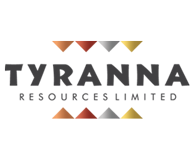 The structure of the Agreement for the AUD $3.2 million sale of the Eureka Gold Project was detailed in both the Company’s and CIO’s announcements dated 1 December 2017.

The parties sought to record the terms of the Agreement in a written document titled Tenement Sale and Purchase Agreement – Eureka Gold Project dated 28 November 2017 (Document).

It has come to the Company’s attention that the Document does not accurately record the terms of the Agreement. This contention is disputed by CIO.

The Company maintains that it has complied with all of its obligations pursuant to the Agreement, including making all payments due to CIO, and is ready, willing and able to proceed to completion. CIO maintains that the Company has failed to satisfy a condition precedent in the Document, entitling CIO to 14.4% of the Company’s issued share capital upon completion. This contention is disputed by the Company.