MD Bruno Seneque presented to a full house of investors in London, following a successful roadshow in the city during the week.

Seneque introduced the company, and the project portfolio, including the new Nevada copper/cobalt project. 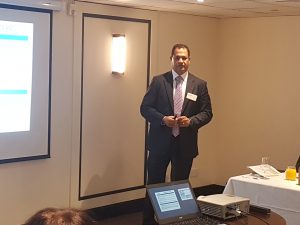 MD Bruno Seneque presented to a full house of investors in London, following a successful roadshow in the city during the week. Such was the interest for this presentation, in a busy week in London with a few competing events, that for the first time we had a waiting list and a few were unable to attend due to venue capacity being reached.

Seneque introduced the company, and the project portfolio, including the newly acquired  Nevada copper/cobalt project.

Tyranna have a strong management team with significant experience and success. Although currently an explorer, it’s interesting to note that most management have a history of production rather than exploration. A sense of future direction perhaps?

Tyranna is effectively four projects rolled up into one company, and they are acting as a project generator in adding exciting new projects and looking to JV and farm out some of the older ones.

The current focus is on generating short term cashflow, with which to use to organically fund exploration on other projects.  With this in mind, Tyranna acquired the Eureka Gold Project, located 30 miles from Kalgoorlie in Western Australia. Eureka is currently being mined by a TSX listed company, and due to finish any day. Once they have gone TYX will commence some drilling and then fund a cut back, to enlarge the open pit area, and that should give them some 20,000 ounces extra to mine.

The cost of that work will be around AUS $10 million, a low capex by mining standards, helped by the ore being trucked down to Kalgoorlie to be processed.

Brief details of their four projects:

Currently ending production, then handing over to Tyranna. This will be followed by:

Located around 25 miles SW of Las Vegas, Goodsprings is the newest project in the Tyranna portfolio. It is located in a previous high grade copper and cobalt mining district, mined during both world wars, and abandoned since. The area has not been explored by modern mining methods.

The project has excellent infrastructure, and an experienced workforce is available in Jean, Nevada, 7 miles away, as well as in Las Vegas itself.

Tyranna control 9,700 km squared around the producing Challenger Gold Mine.

Tyranna are exiting this project due to its size, and ongoing drilling costs.