Advised that it has ramped up its strategy to grow the inventory at its 100%-owned, 3.07 M oz Bardoc Gold Project near Kalgoorlie, with a major new drilling program underway at the cornerstone Zoroastrian deposit.

This campaign is aimed at growing and upgrading the 530,000oz Resource at Zoroastrian. 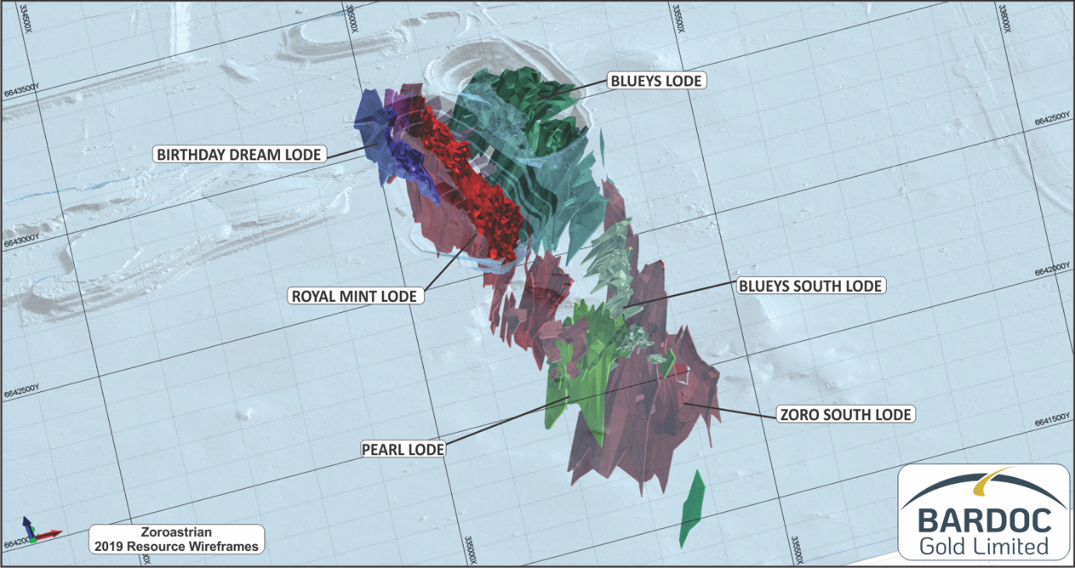 .
Campaign to grow the 530,000oz Zoroastrian Resource is part of Bardoc’s two-pronged
strategy to grow its total 3.07 M oz Resource in parallel with developing the project

Bardoc Gold Limited (ASX: BDC, Bardoc or the Company) is pleased to advise that it has ramped up its strategy to grow the inventory at its 100%-owned, 3.07 M oz Bardoc Gold Project near Kalgoorlie, with a major new drilling program underway at the cornerstone Zoroastrian deposit.

This campaign is aimed at growing and upgrading the 530,000oz Resource at Zoroastrian. As part of this plan, Bardoc has announced an updated Exploration Target for Zoroastrian of between 2.05Mt – 2.59Mt at a grade range of between 3.40-4.18g/t for 225-336koz Au.

The potential quantity and grade of the Exploration Target at Zoroastrian is conceptual in nature. There has been insufficient exploration to estimate a Mineral Resource.

It is uncertain if further exploration will result in the estimation of a Mineral Resource.

The Company is also pleased to advise that it has intersected significant gold mineralisation in both widespaced exploration drilling and initial follow-up Reverse Circulation drilling at the satellite North Kanowna Star (NKS) Project.

The scale of the district is comparable to the +1Moz Zoroastrian Excelsior corridor.
The 100%-owned North Kanowna Star Project is located 29km south-east of Bardoc and has a Mineral Resource of 32koz at the Perseverance-Wedge Deposit. NKS has the potential to emerge as significant additional source of satellite ore to the broader Bardoc Gold Project development.

• Major new diamond drilling program underway at Zoroastrian to grow both the Resource and underground Ore Reserve.
• Zoroastrian Indicated and Inferred Mineral Resource stands at 7.516Mt at 2.2g/t for 530,000oz;

In addition, the Company has announced a substantial new Exploration Target. The current drill program aims to convert this to JORC Mineral Resources.

• The drilling has identified up to 13 prospects with resource potential over several kilometres. The scale of this emerging gold corridor is similar to the +1Moz Excelsior-Zoroastrian deposits.

“The current drilling program has the potential to deliver substantial growth in Resources, Reserves and mine life at the cornerstone 530,000 oz Zoroastrian deposit.

“Bardoc is embarking on another chapter of value creation for shareholders with a major drilling program underway which has the potential generate significant growth in our inventory and mine life.

“This drilling will take place in parallel with the strong progress we are making towards project development, providing two avenues of value creation for shareholders.

“Zoroastrian is without a doubt one of the best assets in our portfolio, with drilling at the project consistently exceeding expectations. The project already has a substantial Mineral Resource of 530k oz and we see huge potential to significantly increase both the Resource and Reserve.

“Zoroastrian underground is a key component of our operating plan which, when in full production, generates over $50 million free cash flow per year. Extending the mine life at Zoroastrian has immense economic benefits for the operation.

“On other fronts, we are excited to report significant progress with exploration at North Kanowna Star. From our very first drill campaign at NKS, we have been excited by the scale of the alteration and mineralisation at the project.”

For brevity, this Bardoc Gold news summary has been redacted, to read the full news release, please click HERE

At the time of writing the author holds shares in Bardoc Gold bought in the market at the prevailing price on the day of purchase.