The Gordon Creek Project has an indicative after-tax (and royalty) net present value (“NPV”) of US$690.5 million or CAD$897.7 million. 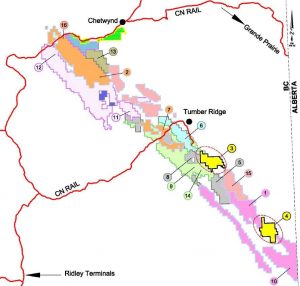 Map of the Peace River Coalfield, Flatbed is licence 3, and Huegenot licence 4

The PEA report, prepared by Stantec Consulting Services Inc. (“Stantec”; formally Norwest Corporation), in accordance with CSA National Instrument 43-101 (“NI 43-101”) standards, will be completed and filed on SEDAR (the System for Electronic Document Analysis and Retrieval) within 45 days of the date of this news release. The results of the PEA show that the Gordon Creek Project demonstrates positive economics, and that it is worthy of continued exploration and development.

Highlights of the PEA report respecting the Gordon Creek Project are summarized below. All costs are in US dollars, however, where Canadian dollar equivalents are provided they have been converted using an exchange rate of US$1.00 equals CAD$1.30.

The PEA assumed that the Gordon Creek Project would be connected by road to the existing rail line south of Tumbler Ridge. The rail line would be accessed via a loadout located in the area of an existing coal loadout operated by Peace River Coal. Costs for trucking product coal to the proposed loadout are included in the Project’s operating cost projections.

A summary of the financial analyses is shown in the following table:

This PEA is preliminary in nature and includes Inferred mineral resources that are considered to be too geologically speculative to be subject to economic considerations that would enable them to be categorised as mineral reserves. There is no certainty that the forecast results stated in the PEA will be realised.

This news release has been reviewed by Derek Loveday of Stantec, a Professional Geologist and a Qualified Person, as defined in NI 43-101. Neither the TSX Venture Exchange nor its Regulation Services Provider (as that term is defined in the policies of the TSX Venture Exchange) accepts responsibility for the adequacy or accuracy of this news release.

Colonial Coal is a publicly traded coal corporation in British Columbia that focuses primarily on coking coal projects. The northeast Coal Block of British Columbia, within which our Corporation’s projects are located, hosts a number of proven deposits and has been the subject of M&A activities by Anglo-American and others.

Additional information can be found on the Company’s website www.ccoal.ca

or by viewing the Company’s filings at www.sedar.com