The final mining conference in London pre-summer took place yesterday, the Global Mining Finance Conference, and, despite tube strike issues, it was packed with every seat taken, and standing room only at the back. 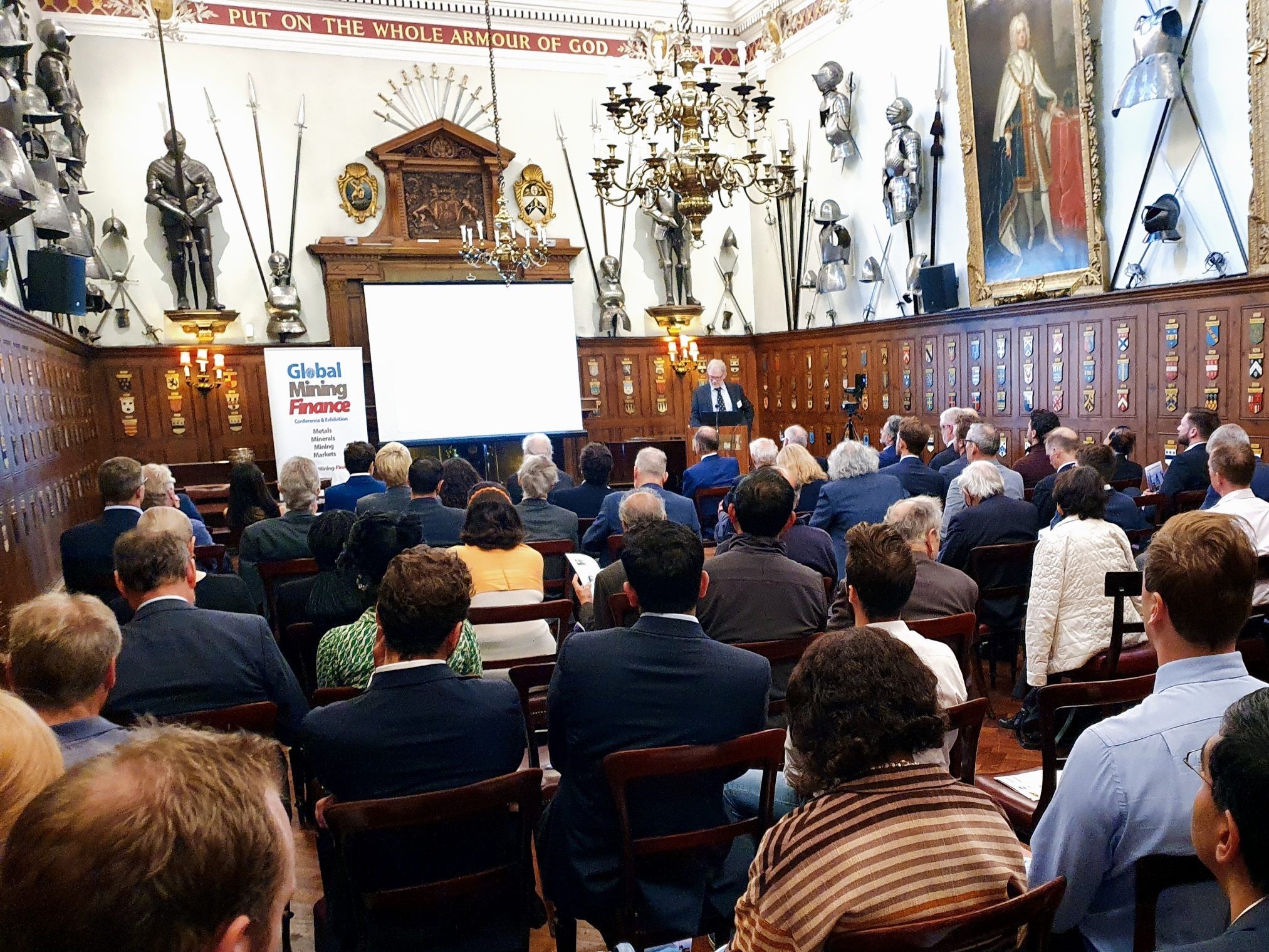 Ariana Resources’ Chris Sangster addresses a full house at the Global Mining Finance Conference amid the splendour of  The Armourers’ Hall, Moorgate, City of London.

The Global Mining Finance Conference packed them in for an exciting lineup of speakers.

The Global Mining Finance Conference (GMFC) is a traditional mining conference, the way they used to be back in the ground breaking Minesite days, presenters on a stage reaching up to 100 people with their message, answering a couple of pertinent questions, and then being available in the networking sessions for a more informal chat.

Global Mining Finance prefer to carry on their traditional style conferences as an alternative to the one on one meeting conferences that have become the norm. Not everyone is comfortable meeting a CEO in a one on one situation.

The networking is very important, and, as everyone has seen the same presentations, the discussion focuses around the merits of the presenting companies.

Global Mining Finance switched to the historical splendour of the Armourers’ Hall to increase capacity, and those additional seats are now also full.

It’s a wonderful venue to hold a traditional mining conference.

The final mining conference in London pre-summer break took place yesterday, the Global Mining Finance Conference, which, despite tube strike issues, was packed from the offset, with every seat taken, and standing room only at the back.

A slight reconfiguration of seating at the mid morning break added more seats to ensure everyone was seated comfortably for the second half.

The high numbers clearly dispel the myth you cannot hold a mining conference in London in the summer period, build an interesting lineup of speakers and people will come.

They were backed up with solid presentations by Anglo Asian Mining, Ariana Resources, CleanTech Lithium, and Pensana PLC.

How the day unfolded.

The last thing organisers of a conference in central London want to hear is that there will be a tube strike on the day of their event, yet this happened here!  The strike was in fact completed by 8am, but initial services were overcrowded and patchy.

Despite this difficulty, people arrived in large numbers to hear Alasdair Macleod, Head of Research at Goldmoney open the conference with his keynote talk on his current views of the gold sector. Alasdair is a veteran of the financial markets and has a treasure trove of knowledge that only a lifetime working in the sector can impart.

The first of the company presentations was a rare mining development to production success in the London markets, Anglo Asian Mining.

Presented by CFO Bill Morgan, Anglo are based in Azerbaijan, a former Soviet Union republic, with close ties to Turkey, which provides regional stability, despite issues with neighbouring Armenia that still rumble on.

Anglo have a producing mine, Gadabek,  and several highly prospective exploration and development projects within the country.

Anglo are in production, providing 64,000 gold equivalent ounces in 2021, make a profit, and pay a dividend.

In January 2022, Anglo diversified their country risk by acquiring 19.8% of TSX listed Libero Copper and Gold Corporation., which owns, or has the option to acquire, several copper exploration properties in North and South America, including Mocoa in Colombia, one of the world’s largest undeveloped copper-molybdenum resources.

Ariana took a grass roots mining project in Turkey through from initial exploration to production during a torrid time for mining juniors, and is testament to what a combination of management experience and determination can achieve.

One remembers Chairman de Villiers providing much needed financial support when the market wouldn’t provide it, a sure sign of his confidence in the project at a difficult time for the markets.

Ariana are acquiring significant stakes in development companies based in Cyprus and Kosovo, as they expand their activities to other highly prospective areas within the Mediterranean region.

Currently boasting a JORC resource of 2.1 million ounces of gold, management have a target of 3 million ounces, and given their performance to date, that looks a reasonably achievable objective in my opinion.

A very lively networking coffee break then took place as the gold theme of the opening session concluded.

Following the break the second session had a battery metals and technology theme, and that was opened by Gordon Stein, CFO of newly listed CleanTech Lithium.

Based in northern Chile, and inside the famous Lithium triangle (located in parts of Argentina, Bolivia, and Chile) CleanTech are an exploration and development company looking to prove up a significant sustainable lithium resource.

Gordon discussed CleanTech’s de-risked path to production as they aim to produce material quantities of battery grade lithium with the lowest environmental impact, and be in production by 2024.

CleanTech are early stage, but clearly in a hurry to capitalise on the anticipated high demand for sustainable battery quality lithium, and offer a ground floor opportunity to invest in a startup that may be in production within a couple of years or so.

Pensana PLC CEO Paul Atherley rounded off the corporate presentations with an explanation of of how Pensana is looking to establish a world class independent and sustainable supply chain of rare earth metals vital for the burgeoning electric vehicle, wind turbine, and other strategic industries.

NdPr oxide is key to the manufacture of permanent magnets used in Electric Vehicles
and Offshore Wind turbines, and demand is due to increase five times within the next few years. Currently China supplies 95% of world demand.

Clearly this country risk needs to diversify, which is where Pensana comes in. They plan to produce 4,500 tons PA by 2024, making them almost comparable to the other two non Chinese producers, but at a fraction of their market cap.

The capex has to be funded first of course, but if that hurdle is overcome Pensana’s valuation looks incredibly cheap versus their two other listed peers, Lynas (LCY: AXS) and MP Materials (NYSE: MP).

Rebecca Gordon, CEO of CRU Consulting closed out the conference with her talk on “The Investments Needed as Supply Chains Rearrange due to Geopolitics and the Energy Transition“.