Announced new exploration drilling results from the Beta Hunt Mine have materially extended the strike length of gold mineralization at the Fletcher Zone to over 500 metres.

The recently discovered Gamma Block mineralization strike length has also been extended to over 200 m. Both mineralized systems remain open along strike and at depth.   […] 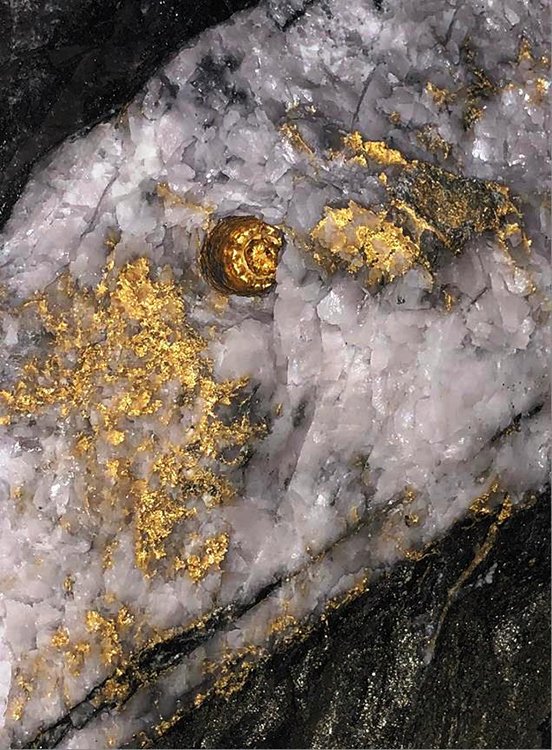 Gold in drill core from Beta Hunt mine, Western Australia

ORONTO, Jan. 24, 2022 /CNW/ – Karora Resources Inc. (TSX: KRR) (“Karora” or the “Corporation”) is pleased to announce new exploration drilling results from the Beta Hunt Mine have materially extended the strike length of gold mineralization at the Fletcher Zone to over 500 metres.

First discovered by Karora in 2016, the Fletcher Zone is a parallel shear zone located approximately 350 metres west from the Western Flanks Zone and represents a third major shear zone at Beta Hunt.

The holes drilled served a dual purpose: to test both the 50C Nickel trough and the underlying Gamma Block gold mineralization. Although Gamma and 50C can be mined separately, they are close enough to be accessed from the same level development potentially reducing cost and access time to mine both areas.

“Exploration at Beta Hunt continues to drive extensions of known primary shears and of newly discovered zones, underscoring the fact that we are only just beginning to understand the true potential of the mine.

“Fletcher is a third major shear zone at Beta Hunt that we have now materially extended for the first time since 2016. New drilling has extended the known strike extent to over 500 metres and over a 150 metre vertical extent. With strike potential up to 2 kilometres, while remaining open at depth, Fletcher has the potential to form a long-term backbone of our operation in future years.

“What is encouraging about both of these zones is that they are easily accessed on the edges of existing development, lowering the cost associated with setting up mining activities.

Lastly, we expect to issue a progress update on our Mineral Resources later in the first quarter, which will include the addition of the maiden Larkin Zone Mineral Resource.”