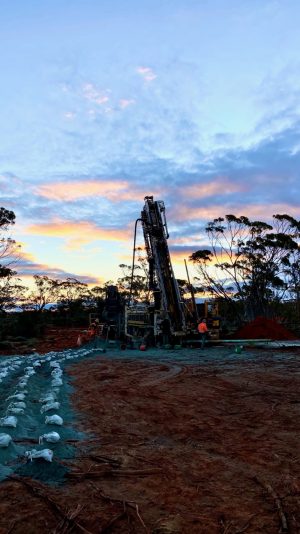 I invested due to the proximity to other mines and mills, Lefroy is an obvious takeover target if they can prove up a commercial resource.

The gold, copper, silver (and lesser molybdenum) mineralisation, which is hosted by multiple diorite-porphyry intrusives and high-magnesium basalt, is considered by the Company to be a new and unique style of gold-copper mineralisation in the Eastern Goldfields of Western Australia. 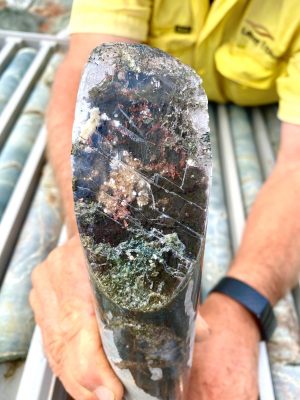 • Assay results from the 400m to 461m interval of the 1245m deep, diamond drill hole, LEFD006, at Burns has confirmed a new zone of gold (Au)-copper (Cu)-cobalt (Co) mineralisation, that provides further support for a polymetallic intrusion related system.
• Within this 61m interval is a new mineralised and altered diorite porphyry, situated west of the main ‘Central Porphyry’ suite at Burns, which returned results that correspond to the  stronger zones of visually identified magnetite and sulphide mineralisation, and include:
o 19.6m at 0.33g/t Au and 0.75% Cu from 428m-447.6m that includes
 3.50m at 0.86g/t Au, 0.72% Cu and 0.09% Co from 430m, and
 6.30m at 0.47g/t Au, 1.70% Cu and 223ppm Co from 433.5m
• This confirmation of previously unrecognised Au-Cu-Co mineralisation associated with
strong magnetite veining in LEFD006 is an important new development for the strongly
magnetite-altered Burns system.

• Assay results for the remainder of LEFD006 are expected in October.
• Prompted by these initial elevated Co results, the Company will select intervals from
magnetite-altered intervals from previous drill holes at Burns for Co analysis.
LEFD006 Hematite altered porphyry with chalcopyrite 0.5g/t Au and 2.3% Cu.

LEX is aiming to advance the understanding of the scale and genesis of this system through a deep diamond drilling program. Four holes, LEFD006-009, have now been completed for 2783 metres.

Lovejoy is considered to be part of the larger Burns Intrusive Complex (BIC).

Assay results have been received from the 400m to 461m interval in hole LEFD006. Results are pending for the remainder of this hole.

Co-funding for this hole is being provided under the Exploration Incentive Scheme (EIS) managed by the WA Department of Mines, Industry Regulation and Safety (refer LEX ASX release 29 October 2021).

.
LEFD006 was designed to evaluate the Burns Au-Cu mineralised diorite-porphyry host rock to a target (vertical) depth of 1000m from surface, with key aims to:
• Test the continuity of the mineralisation discovered to date, at depth, on a vertical scale
• Test the lateral extent of the system by 250m west of the main known mineralisation
• Provide geological and geochemical information to support ongoing external research
• Support that Burns is a new, large, Archean age Au-Cu intrusion related mineral system

.
The completion of LEFD006 established four broad geological domains (Figure 2), each with contrasting alteration and geology, which now demonstrate that the Burns system has a width of at least 600m, with the western limit yet to be defined (refer LEX ASX release 1 September 2022).

.
The hole has also established continuity to the multiple porphyry units at depth, approximately 300m below the existing drilling on the baseline section (0N) and to 1000m vertically below surface.

The system remains open at depth and along strike.

.If you need clarification of any information contained in this note, or have any questions, I will be delighted to assist – Please email andrew@city-investors-circle.com

At the time of writing the author holds shares in Lefroy Exploration, bought in the market at the prevailing price on the days of purchase.