The MOU will define terms for the negotiation of a definitive agreement to form a new JV for the development of the Maricunga Salar into a lithium brine producer. 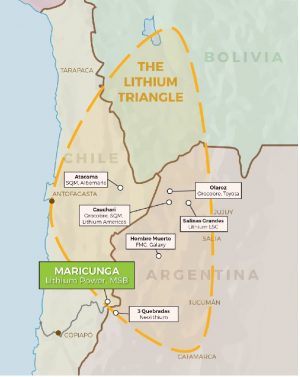 The MOU will define terms for the negotiation of a definitive agreement to form a new joint venture allowing for the development of the Maricunga Salar into a world-class lithium brine producer.

Lithium Power International’s Chief Executive Officer, Cristobal Garcia-Huidobro, commented: “The Company is extremely pleased to reach this MOU with CODELCO, following significant negotiations. The objective of the MOU is to define the terms for a definitive agreement to develop a joint project in the Maricunga Salar under a public-private alliance model, which would allow it to become the third lithium producer in Chile.

This JV would allow for a very robust and scalable project, and would also fast-track LPI’s flagship Maricunga development, including provision of all the necessary permits. It would include CODELCO’s key CEOL contract and the Nuclear Commission permit covering the entire salar, which would complement the expected approval of MSB’s EIA before year-end. This means there will be certainty regarding the permitting of the project.

Consolidation of the mining concessions would include an option to increase production capacity and/or extend the life of the mine beyond its expected 20-year span, therefore creating additional value for all shareholders.