PDAC 2018 opened its doors yesterday in bright sunshine and a chill in the wind.Inside the convention centre was busy and the aisles crowded with investors.

Enviroleach Technologies came so close to winning the Disruptive Mining award last night, finishing as runner up in a strong group of contenders. 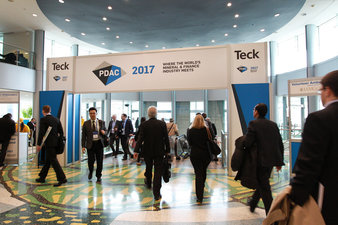 PDAC 2018 opened its doors yesterday morning on a bright sunny day with a chill in the wind, but the nicest weather in my recollections after many years attending the show.

One feature of the show is that company booths remain in the same location year after year making navigation to your favourite booths easy. I was able to follow up with some of our former presenters to check on progress since we last met. The first day is the best day to do this else they are often off the stand “in meetings” (often in the bar!) and it can be hard to connect with people.

I did not detect an overly optimistic atmosphere in the show, which is unusual as obviously everyone attending has a vested interest in commodities and mining stocks rising, so that was refreshing.

I bumped into the permanently effervescent Fran Callaghan, who has a new project underway that looks interesting, and I will be reviewing that when I return.

Enviroleach Technologies, who presented to our group recently in London were runners up in the Disruptive Mining Award, and narrowly missed the $1 million first prize. Stll, the prestige of being in the finals should help raise their profile in the investment community.