Announced significant high-grade gold intercepts from the ongoing 60,000 m exploration drill program at its O’Brien gold project located along the Larder-Lake-Cadillac Break, halfway between Rouyn-Noranda and Val-d’Or in Quebec, Canada.

1. VG denotes the presence of visible gold
2. Core length or down hole width. True widths are estimated at 70% to 80% of down hole width. To the extent possible, primary intercepts reflect minimum mining width (1.5 m true width) consistent with assumptions used in the 2019 resource estimate.
3. Assay grades shown uncapped. A capping factor of 60 g/t Au was used in the 2019 resource estimate4. Table includes only intercepts that meet 5 g/t Au cut-off and minimum mining width constraints used in the 2019 MRE. For a full listing of drill results from current drilling program click here.

“We are very pleased with results from our ongoing drill program that continue to validate our litho-structural model and highlight the significant resource upside at O’Brien. Our work program so far has been focused within a 1 km along strike to the east of the historic O’Brien Mine. We believe there is significantly more upside to be unlocked as we systematically step out to drill test more than the 5 km of strike length that we control along the prolific Cadillac Break.” commented Mario Bouchard, Chief Executive Officer 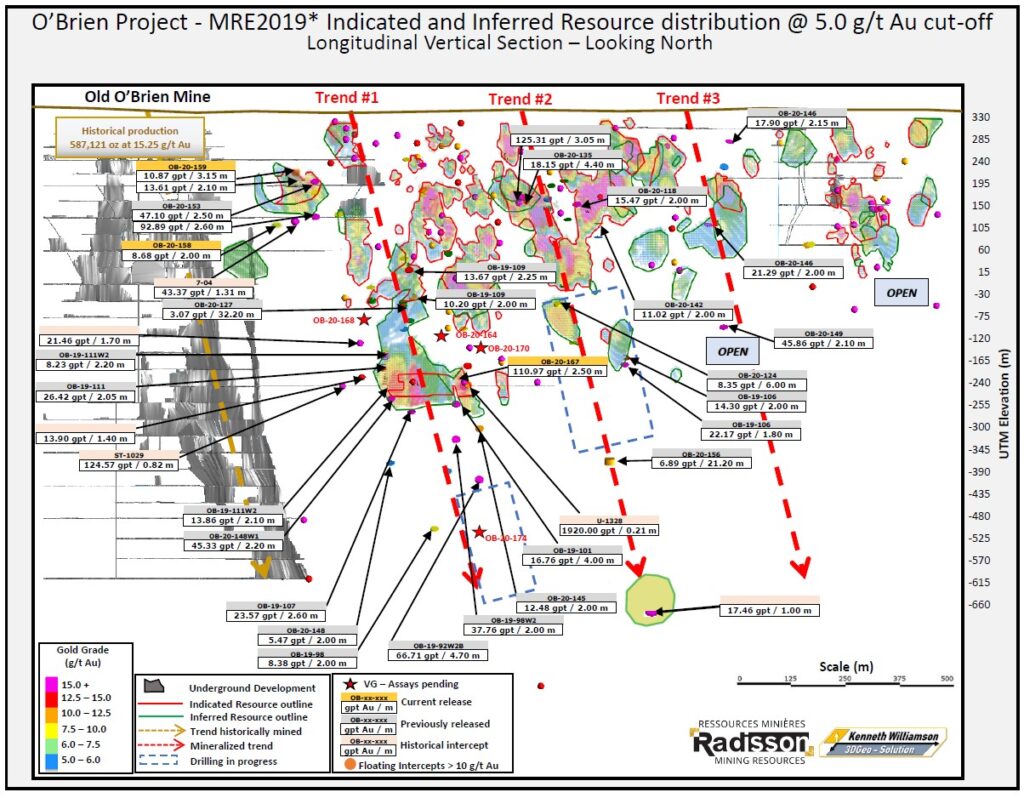 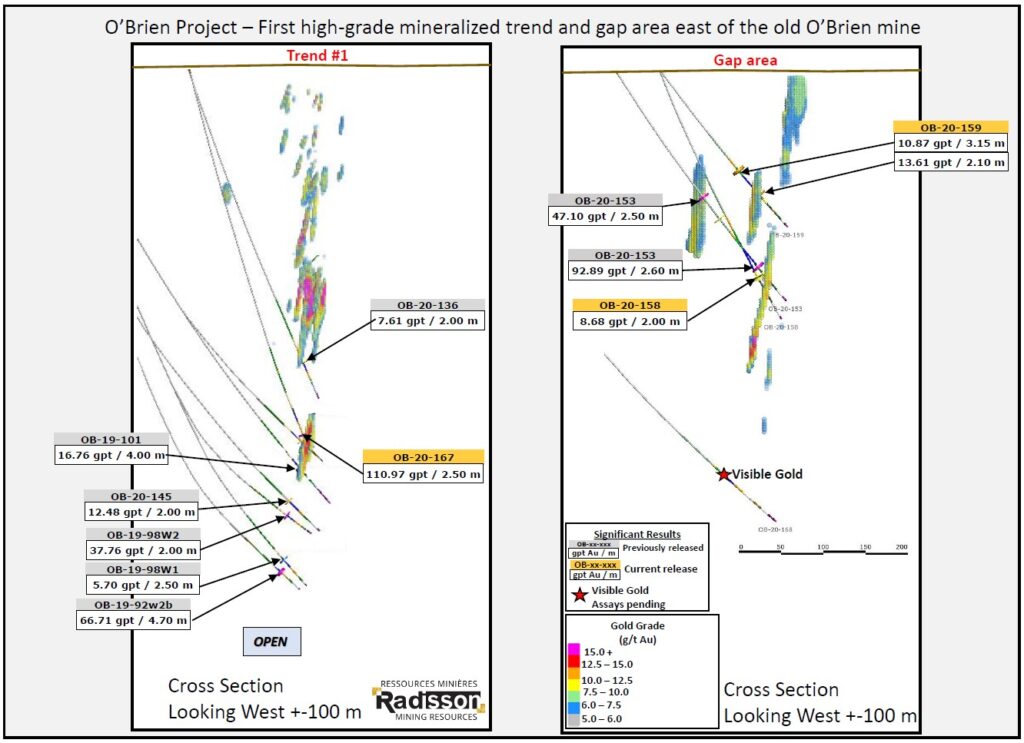 All drill cores in this campaign are NQ in size. Assays were completed on sawn half-cores, with the second half kept for future reference. The samples were analyzed using standard fire assay procedures with Atomic Absorption (AA) finish at ALS Laboratory Ltd, in Val-d’Or, Quebec. Samples yielding a grade higher than 5 g/t Au were analyzed a second time by fire assay with gravimetric finish at the same laboratory. Samples containing visible gold were analyzed with metallic sieve procedure. Standard reference materials and blank samples were inserted prior to shipment for quality assurance and quality control (QA/QC) program.

Richard Nieminen, P. Geo, Exploration manager, acts as a Qualified Person as defined in National Instrument 43-101 and has reviewed and approved the technical information in this press release.

Radisson is a gold exploration company focused on its 100% owned O’Brien project, located in the Bousquet-Cadillac mining camp along the world-renowned Larder-Lake-Cadillac Break in Abitibi, Quebec. The Bousquet-Cadillac mining camp has produced over 21,000,000 ounces of gold over the last 100 years. The project hosts the former O’Brien Mine, considered to have been the Abitibi Greenstone Belt’s highest-grade gold producer during its production (1,197,147 metric tons at 15.25 g/t Au for 587,121 ounces of gold from 1926 to 1957; Kenneth Williamson 3DGeo-Solution, July 2019).

For more information on Radisson, visit our website at www.radissonmining.com

On behalf of the board of directors

Meetings are small group, highly focused and engaged, with a lively Q and A to follow the main presentation.

If you wish to present to our select group of active mining investors, please email  andrew@city-investors-circle.com for information.

These articles are for information purposes only, and are not recommendations in any form.  Always consult an investment professional.