Scorpio Gold {TSX.V: SGN} northern neighbour in Nevada, Nevada based Sniper Resources {TSX.V: SIP}  has been inspired by the success of Scorpio’s mining operation to resume drilling at their Weepah site.

Sniper is proceeding with a non-brokered private placement of up to C$500,000 comprised of up to 10,000,000 units at a price of $0.05 per unit. Each unit will be comprised of one common share and one share purchase warrant, with each share purchase warrant exercisable for a term of two years at an exercise price of $0.10 per Warrant Share. Commissions and/or finder’s fees may be paid in connection with this placement. The placement is subject to regulatory approval.

The net proceeds of the placement will be used for exploration on the Company’s Weepah gold project, Nevada and for general corporate purposes. See details below.

“We value our shareholders. Recognizing that you have been loyal supporters for many years, we have structured this placement using the new Existing Shareholder Exemption to enable you to participate” said Sniper president Scott Baxter. “With Scorpio Gold’s Mineral Ridge mine, which is just to the south of Weepah, expected to produce 40-45,000 ounces this year, and Columbus Gold on its Eastside Project, which is just north of Weepah, beginning a 175 hole (45,000 metres) drilling program the time is right for a resumption of drilling at Weepah. (See map below for relative locations of Mineral Ridge and Eastside to our Weepah property.) I encourage our shareholders and other interested investors go to our website www.sniperresources.com for more information including all historical news releases. Lastly, I urge our shareholders and other interested market participants to seriously consider investing in this private placement. Please read the Offering details below and the specific subscription instructions in the section below titled ‘How to Participate’.”

The Offering will be conducted by the Company using a recently approved special exemption for existing shareholders (the “Existing Shareholder Exemption” as described in Multilateral CSA Notice 45-313 – Prospectus Exemption for Distributions to Existing Security Holders) as well as the ‘accredited investor’ and ‘eligible investor’ exemptions (National Instrument 45-106 – Prospectus and Registration Exemptions “NI 45- 106”), and other applicable exemptions available to the Company. The Existing Shareholder Exemption is available to shareholders residing in all Canadian provinces. Subscriptions may be accepted from shareholders outside of Canada with evidence there is a comparable or otherwise applicable exemption permitting the subscription in that jurisdiction.

The Offering is available to all shareholders of the Company as at June 30, 2015 (the “Record Date”) who are eligible to participate under the Existing Shareholder Exemption. Any person who becomes a shareholder of the Company after the Record Date is notpermitted to participate in the Offering using the Existing Shareholder Exemption but other exemptions may still be available to them. Shareholders who became shareholders after the record date should consult their profession advisors when completing their subscription form to ensure that they use the correct exemption.

There are conditions and restrictions when relying upon the Existing Shareholder Exemption, namely, the subscriber must: a) be a Sniper shareholder on the Record Date, b) be purchasing the Units as a principal, i.e. for their own account and not for any other party, and c) may not purchase more than $15,000 value of securities from Sniper in any twelve month period. There is one exception to the $15,000 subscription limit. In the event that a subscriber wants to purchase more than $15,000 value of securities then they may do so, provided they have first received ‘suitability advice’ from a registered investment dealer. In this case subscribers will be asked to confirm the registered investment dealer’s identity and employer.

The Offering may be closed in one or more tranches as subscriptions are received. There is no minimum Offering amount.

All securities issued will be subject to a four (4) month hold period from the date of closing. The Offering is subject to the approval of the TSX Venture Exchange.

Commissions and/or finder’s fees payable in shares of the Company may be paid in respect of this Offering.

The net proceeds received from the Offering after payment of issue costs and finder’s fees/commissions, if any, will be used for the following corporate purposes:

If the Offering is not fully subscribed then management of the Company will determine the allocation of net proceeds amongst the above corporate purposes in the best interests of the Company.

About the Weepah Gold Property

The Weepah region production was mined the 1930’s and later in the 1980’s. The principal drill targets are where gold occurs as replacements in sanded, or lightly silicified limestone, exposed in small outcrops.

The property was drilled in 2011 by Columbus with significant gold intercepts. In 2012 Sniper drilled 20 holes (4,520′) with encouraging results as listed in the Table below.

A 2015 program of up to 30 holes in three phases is planned subject to available financing. A formal Notice of Drilling Operations has been submitted to the US Bureau of Land Management for Phase I comprised of six Reverse Circulation drill holes of up to 2000′ total from three different drill sites on the property. Phases II and III programs are planned to follow-up on positive results as warranted. A drill rig and related equipment has been secured.

Sniper Resources Ltd. is engaged in the identification, acquisition and exploration of gold properties in the State of Nevada, USA. Sniper owns a 100% interest in the Weepah gold property located approximately 16 miles south of Columbus Gold’s Eastside deposit in Nevada. (see location map below) The highest assay from prior drill programs on Weepah is 21.80 grams/tonne (0.636 oz Au/ton)over a 1.5 metre (5 feet) interval, and the longest continuously mineralized interval was 47.2 m (155 feet).

All scientific and technical information contained in this news release has been reviewed and approved by Douglas H. McGibbon, M.S.(Geol.), P. Geo., who is a “qualified person” within the meaning of National Instrument 43-101. 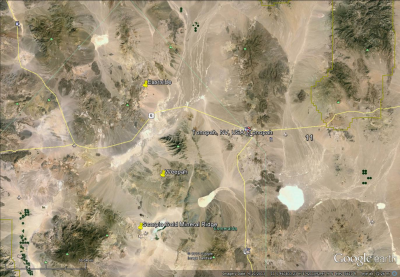 To subscribe to Sniper’s newsletter, The Sniper News, email infoatsniperresources@gmail.com.