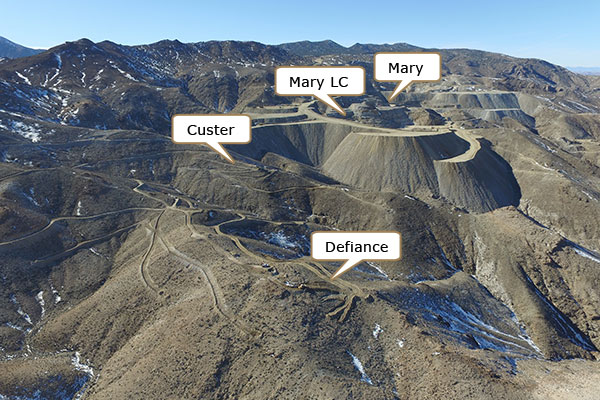 Current mining is expected to continue through the first week of November 2017, at which time mining will be suspended while evaluations are conducted by Mine Technical Services (“MTS”) on the mine’s remaining internal resources for a NI-43-101 compliant resource and reserve estimate and updated mine plan.

Based on the positive results from the recently completed feasibility study, the Company intends to pursue financing for the construction of a 4,000 TPD milling facility with CIL recovery and dry stack tailings circuit. The Company also intends to add additional run of mine resources, when confirmed by MTS, to the already confirmed heap leach resource for processing and recovery of the contained precious metals. Construction of the milling facility will begin once financing is obtained and the Plan of Operations Amendment and Water Pollution Control permit are approved and issued. Permit approval is expected in early 2018.

The Company will provide further updates on its Q4 activities at Mineral Ridge in due course.

(1) A weighted average metallurgical recovery factor has been applied to the estimated contained ounces crushed and placed on the leach pad based on the pit from which the ore was mined.

Scorpio Gold holds a 70% interest in the producing Mineral Ridge gold mining operation located in Esmeralda County, Nevada with joint venture partner Elevon, LLC (30%). Mineral Ridge is a conventional open pit mining and heap leach operation. Current mining is expected to continue through the first week of November 2017 and the Company intends to proceed with financing and construction of a mill facility for the processing of the heap leach resource and expected run of mine resources upon permit approval. The Mineral Ridge property is host to multiple gold-bearing structures, veins and lenses at exploration, development and production stages. Scorpio Gold also holds a 100% interest in the advanced exploration-stage Goldwedge property in Manhattan, Nevada, with a fully permitted underground mine and 400 ton per day mill facility. The Goldwedge mill facility has been placed on a care and maintenance basis and can be restarted immediately when needed.

Scorpio Gold’s Chairman, Peter J. Hawley, PGeo, is a Qualified Person as defined by National Instrument 43-101 and has reviewed and approved the content of this release.