Announced its financial results for the fourth quarter (“Q4”) and year ended December 31, 2018.

This press release should be read in conjunction with the Company’s consolidated financial statements for the year ended December 31, 2018 and MD & A for the same period, available on the Company’s website. 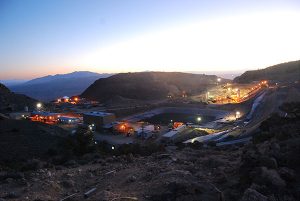 .
Vancouver, April 29, 2019 – Scorpio Gold Corporation (“Scorpio Gold” or the “Company”) (TSX-V: SGN) announces its financial results for the fourth quarter (“Q4”) and year ended December 31, 2018. This press release should be read in conjunction with the Company’s consolidated financial statements for the year ended December 31, 2018 and Management’s Discussion & Analysis (“MD&A”) for the same period, available on the Company’s website at www.scorpiogold.com and under the Company’s name on SEDAR at www.sedar.com. All monetary amounts are expressed in US dollars unless otherwise specified.
.
On April 15, 2019, the Company completed a 2 for 1 consolidation of its outstanding share capital. All share and per share amounts are shown on a post-consolidated basis retroactively throughout these financial statements

(1)This is a non-IFRS measure; refer to Non-IFRS Measures section of this press release and the Company’s Management Discussion & Analysis for a complete definition and reconciliation to the Company’s financial statements.

The Company’s main focus is to raise sufficient financing to improve its financial position to allow it to proceed with the construction of a new processing facility at Mineral Ridge with a view to process heap leach materials and additional open-pit mineral reserves.

The discussion of financial results in this press release includes reference to Adjusted net earnings, Adjusted EBITDA, Total cash cost per ounce of gold sold which are non-IFRS measures. The Company provides these measures as additional information regarding the Company’s financial results and performance. Please refer to the Company’s MD&A for the year ended December 31, 2018 for definitions of these terms and a reconciliation of these measures to reported International Financial Reporting Standards (“IFRS”) results.

Scorpio Gold holds a 100% interest in the producing Mineral Ridge gold mining operation located in Esmeralda County, Nevada. Mineral Ridge is a conventional open pit mining and heap leach operation. Mining at Mineral Ridge was suspended in November 2017; however, the Company continues to generate limited revenues from residual but diminishing recoveries from the leach pads. Scorpio Gold also holds a 100% interest in the advanced exploration-stage Goldwedge property in Manhattan, Nevada with a fully permitted underground mine and 400 ton per day mill facility. The Goldwedge mill facility has been placed on a care and maintenance basis and can be restarted immediately when needed.

Scorpio Gold’s Chairman, Peter J. Hawley, P.Geo., is a Qualified Person as defined in National Instrument 43-101 and has reviewed and approved the content of this release.