Scorpio Gold {TSX.V: SGN} have announced the passing of the 100,000 ounces of gold production at Mineral Ridge, a significant achievement.

This was achieved with Q3 production of 11,228 ounces, lighter than in previous quarters as low grade ore was worked through, but Scorpio President Steve Roebuck confirmed that guidance of 40 – 45,000 production ounces for the full year remains on target.

Steve Roebuck, President of the Company, reports. “On behalf of the entire Scorpio Gold team, we are very proud of our production output in Q3, during which we achieved our second highest quarterly output since we declared commercial production in January 2012. As of September 30, 2014, total production at the Mineral Ridge Operation since January 2012 stands at 101,782 ounces of gold.”

“It was another robust quarter at Mineral Ridge, with our new high capacity carbon column continuing to draw down gold from the leach pad in-process inventory, which helped offset lower head grades in Q3 as we complete our production transition from the Drinkwater pit to the Mary pit. Head grades are expected to increase in Q4 of 2014. We reiterate our guidance of 40,000 to 45,000 ounces of gold production at Mineral Ridge in 2014.” 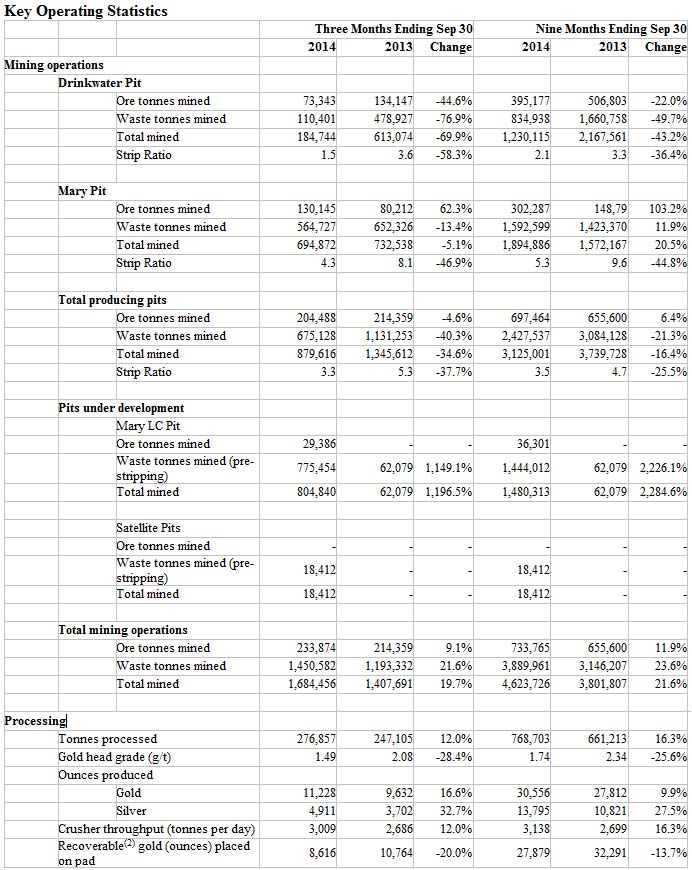 (1) A 65% metallurgical recovery factor has been applied to the estimated contained ounces crushed and placed on the leach pad.

Scorpio Gold holds a 70% interest in the producing Mineral Ridge gold mining operation located in Esmeralda County, Nevada with joint venture partner Waterton Global Value L.P. (30%), and Scorpio Gold is currently entitled to receive 80% of cash flow generated. Mineral Ridge is a conventional open pit mining and heap leach operation. The Mineral Ridge property is host to multiple gold-bearing structures, veins and lenses at exploration, development and production stages. Scorpio Gold also holds a 100% interest in the advanced exploration-stage Goldwedge property and processing facility in Manhattan, Nevada. The Company is assessing its exploration plans for the Goldwedge property as well as the potential for toll milling at the Goldwedge plant, which is currently permitted for 400 tons per day.

Scorpio Gold’s President, Steve Roebuck, PGeo, is a Qualified Person as defined by National Instrument 43-101 and has reviewed and approved the content of this release.

A poorer quarter for Scorpio, but their low grade area comment explains the lower than recent quarters number of 11K ounces gold.

Management have confirmed guidance for the full year of 40 – 45,000 ounces, so are clearly confident that all is on track.

Scorpio’s costs are below industry average, so the current lower price of gold will be hurting for sure, but they should still be cashflow positive, and funding exploration out of production, rather than the norm of continual financings.