In addition, one infill hole at South Ayawilca was reported. 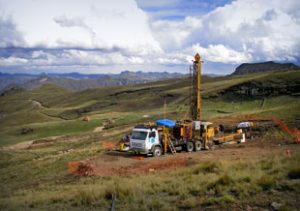 Dr. Graham Carman, Tinka´s President and CEO, stated: “Tinka continues to expand the footprint of the zinc mineralisation at Ayawilca with its 2018 step-out drill program.The new high-grade zinc intersections in the Camp area, where we carried out very limited drilling in the past, should allow us to connect the plus 200 m gap between mineral resources at West and Central Ayawilca (refer to Figure 2). Of particular interest is that high grade zinc mineralisation in this area was encountered within a repeated limestone under a phyllite ‘ledge’, a setting similar to that found in hole A18-129 which intersected exceptional +40% zinc grades. The repeated and mineralized limestone occurs in multiple locations at the project including at the Camp and West Ayawilca (refer to Figure 3).It is possible this deeper mineralisation is more widespread than is currently recognised, as holes at the project in the past were typically stopped almost immediately on hitting phyllite.”

“At West Ayawilca, high-grade zinc intercepts beneath the existing resource in holes A18-132 and 135 are interpreted as feeder veins for the high-grade replacement style mineralisation intersected recently in hole A18-129 . Results for several additional follow-up holes are pending.”

“Several infill holes are underway to further improve the geological model of the deposit and to target mineralization underneath the existing resources.The first infill hole drilled at South Ayawilca (A18-133) was positive, intersecting high-grade mineralisation starting at a relatively shallow depth of 140 metres within the sandstones.”