All the holes tested for mineralisation outside the existing mineral resource boundaries. 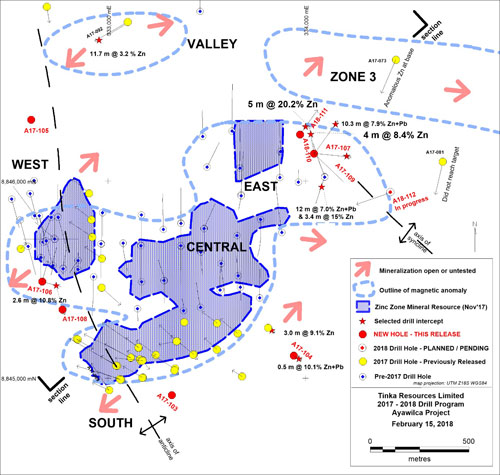 All holes were testing for mineralisation outside of the existing mineral resource boundaries. (Ayawilca Inferred Mineral Resource estimate: 42.7 million tonnes grading 6.0% Zn, 0.2% lead, 17 g/t silver and 79 g/t indium; Nov 8, 2017). Four holes (107, 109, 110 and 111) were drilled at the new Zone 3 discovery area, part of a large geophysical target believed to be the northeastern extension of Ayawilca. An additional five holes were drilled at South, West and Central Ayawilca. Drilling of hole A18-112 at Zone 3 has now commenced, with a second drill rig expected to start up once the wet weather conditions improve in March.

Dr. Graham Carman, Tinka´s President and CEO, stated: “The discovery of high grade mineralisation in limestones and in deep veins at Zone 3 is very exciting, as it opens up a lot more exploration potential at the project. It is still early days for the exploration at Zone 3, it is a large target area with only a handful of holes drilled so far and with several geophysical anomalies untested (see drill map, Figure 1). Other priority targets for this year include extensions of the mineralization at West, South, and Central Ayawilca. A new geological interpretation suggests that high-grade, thick zinc mineralisation generally lies near the intersection points of northeast-trending faults and north-south trending folds in the strata. Tinka plans to drill an additional 25 to 30 step-out holes into a range of targets during the first half of 2018.

The Company has two key objectives for 2018: (1) Continue our exploration drill program targeting additional zinc resources at Ayawilca with 15,000 metres of drilling planned; and (2) Advance the project with desktop mining studies and detailed metallurgical tests that will form the basis of a Preliminary Economic Assessment (“PEA”) planned for the second half of 2018. Exact timing of the PEA will depend on the extent to which significant new mineralization is identified in the first half of 2018.

The strong backdrop for zinc remains, with zinc prices close to 11-year highs while inventories are reaching critically low levels not seen since 2008. In particular, there remains a shortage of large high-grade exploration-development projects for zinc in good mining jurisdictions, like Ayawilca, in the marketplace.”

Geological review and new interpretations
A recent geological review of drill cores by Tinka’s geologists, with input from consultant Dr. Paul Pearson of Latin Global Pty Ltd, has led to some new interpretations of the structural controls to the mineralization at Ayawilca. We believe that the lower contact of the Mesozoic Pucará limestone, the principal host to the zinc mineralization at Ayawilca, is a low-angle ‘thrust’ fault that can be traced over several kilometres and dips to the east, in contact with underlying phyllite basement rocks. 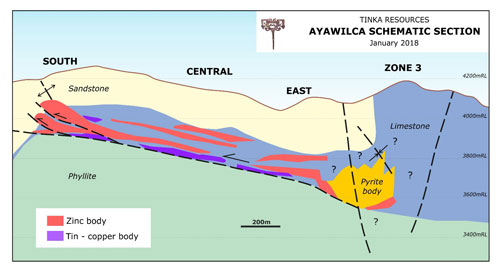