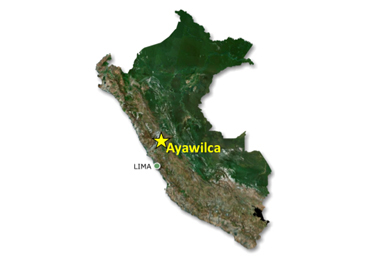 Assays for four new zinc drill hole intercepts are also reported below. An updated zinc and tin resource estimate is expected shortly, with results for all the holes to be included in the resource update now reported (up to hole A17-098). Two drill rigs continue to test new targets at Ayawilca — current holes are A17-105 and A17-091A (Valley and zone 3 areas, respectively) with several more holes planned before the end of the year.

A cut-off of 0.2 per cent tin over six metres has been applied.

Dr. Graham Carman, Tinka’s president and chief executive officer, stated: “Tinka is focusing on realizing the potential of the extensive high-grade zinc mineralization at Ayawilca. However, we believe the project also offers additional upside for other commodities, especially for tin, which occurs in separate mineralized bodies to the zinc. Tin intercepts reported here from South Ayawilca are believed to connect with the Central Ayawilca tin resource, extending the footprint of the tin mineralization by several hundred metres. Tin is currently trading at about six times the price of zinc, and about three times the price of copper on the London Metals Exchange, so these tin intercepts are potentially significant to the project. We look forward to updating our zinc and tin resources very shortly, which will include the 2017 South Ayawilca discovery.”

Zinc assays for four new drill holes from the Ayawilca South and Valley zones are also reported here, with all holes intersecting significant zinc mineralisation. Two holes drilled at the Valley area targeted previously untested magnetic anomalies. Results have confirmed the presence of zinc mineralisation at or near the base of the host carbonate sequence. Two holes tested extensions of South Ayawilca (A17-095 and 098).