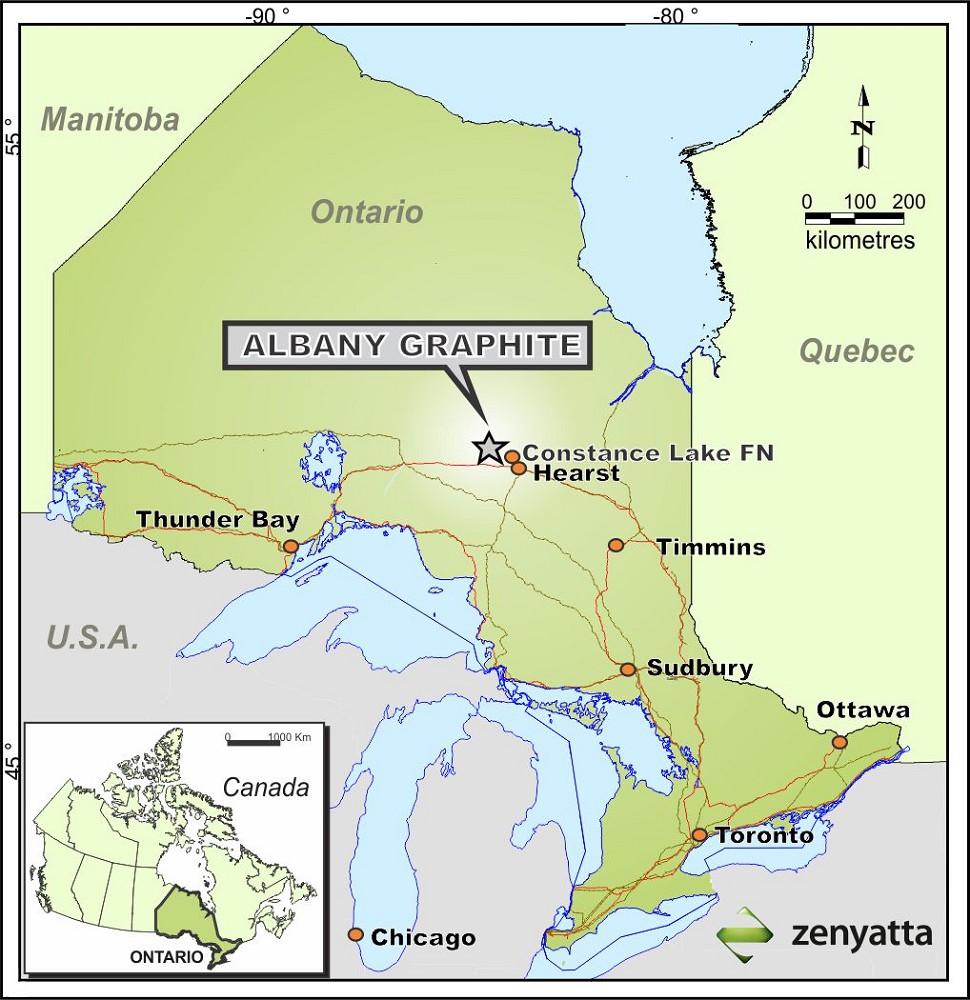 Zenyatta Ventures Ltd. {TSX.V: ZEN} is pleased to announce the successful testing of the Company’s graphene oxide material by a leading U.S. based advanced materials company (‘U.S. Co.’) developing silicon-graphene anodes for the next generation of lithium-ion batteries.

Preliminary results show ease of processing with Zenyatta’s graphene oxide and similar electrochemical performance compared to the control material that is currently being used by U.S. Co. The superior dispersion qualities and good electrochemical performance of the Company’s graphene oxide are desirable properties for this silicon-graphene battery application. Zenyatta’s high-purity graphite was recently converted to graphene oxide by Dr. Aicheng Chen, Professor at Lakehead University, and then sent to the U.S. Co. for testing as an advanced nano-material in a new Lithium-ion battery.

Aubrey Eveleigh, President and CEO of Zenyatta, commented, “Given the present limitations on the existing lithium-ion battery, the World needs to develop a super-battery. Silicon-graphene is the next generation anode being developed for batteries by many advanced material companies. Zenyatta’s graphene oxide has properties that make it a suitable material to be used with silicon in these next generation Lithium-ion batteries. While silicon has many times the capacity of graphite, it cannot be used alone due to rapid degradation. A significant amount of research has been carried out to encapsulate silicon in a graphene material to enhance the cycle life while also increasing charge capacity and durability for advanced lithium-ion batteries.”

Mr. Eveleigh added “We are very excited with the potential of our graphene to play a key role as a component of the next generation batteries. The adaption of silicon-graphene based anode batteries could further accelerate the fast growing market for energy storage, especially for the automotive sector. Having a consistent and high quality raw material source in North America for an end-user’s supply chain is critical in order to maintain long term quality control for product specifications.” 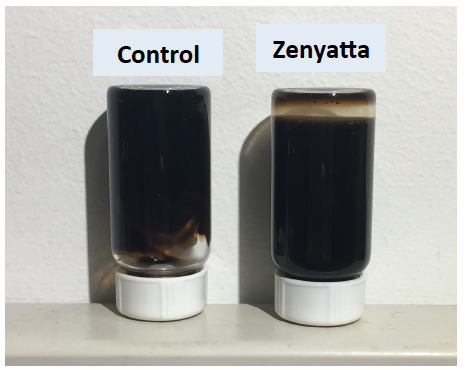 U.S. Co. will continue to carry out advanced testing on Zenyatta’s graphene oxide for use in Lithium-ion anode composite material. Additional testing will include the determination of the following:

Zenyatta Ventures Ltd. is developing the Albany Graphite Deposit situated in northeastern Ontario, Canada. The deposit is a unique type of igneous-hosted, fluid-derived graphite mineralization containing highly crystalline carbon in two large breccia pipes. The Company is collaborating with several partners in Asia, Europe and North America using its high purity graphite for Lithium-ion batteries, fuel cells and graphene. The outlook for the global graphite and graphene market is very promising with demand growing rapidly from new applications. It is now considered one of the more strategic elements by many leading industrial nations, particularly for its growing importance in high technology manufacturing and in the emerging “green” industries such as electric vehicle components.

The Albany graphite deposit is situated 30 km north of the Trans-Canada Highway, power line and natural gas pipeline near the communities of Constance Lake First Nation and Hearst. A rail line is located 70 km away with an all-weather road approximately 10 km from the graphite deposit. The world trend is to develop nano-material products for technological applications that need extraordinary performance using ultra-high purity graphite powder at an affordable cost. Albany graphite can be upgraded to ~99.9% C with very good crystallinity without the use of aggressive acids (hydrofluoric) or high temperature thermal treatment therefore having an environmental advantage over other types of upgraded high-purity graphite material.

Mr. Aubrey Eveleigh, P.Geo., Zenyatta’s President and CEO, is the “Qualified Person” for the purposes of National Instrument 43-101 and has reviewed, prepared and supervised the preparation of the technical information contained in this news release.

CAUTIONARY STATEMENT: This analysis does not represent a statistically large sample size. Furthermore, these positive results do not mean that Zenyatta can extract and process Albany graphite for graphite applications on an economic basis. Without a formal independent feasibility study, there is no assurance that the operation will be economic. The Company has completed a July 9, 2015 Preliminary Economic Assessment which indicates an open pit mine life of 22 years (excludes underground resource which is open at depth) producing 30,000 tonnes purified graphite per annum (see Zenyatta press release of 1 June 2015). The PEA is preliminary in nature, it includes inferred mineral resources that are considered too speculative geologically to have the economic considerations applied to them that would enable them to be categorized as mineral reserves, and there is no certainty that the preliminary economic assessment will be realized. Neither TSX Venture Exchange nor its Regulation Services Provider (as that term is defined in the policies of the TSX Venture Exchange) accepts responsibility for the adequacy or accuracy of this release. This news release may contain forward looking information and Zenyatta cautions readers that forward looking information is based on certain assumptions and risk factors that could cause actual results to differ materially from the expectations of Zenyatta included in this news release. This news release includes certain “forward-looking statements”, which often, but not always, can be identified by the use of words such as “potential”, “believes”, “anticipates”, “expects”, “estimates”, “may”, “could”, “would”, “will”, or “plan”. These statements are based on information currently available to Zenyatta and Zenyatta provides no assurance that actual results will meet management’s expectations. Forward-looking statements include estimates and statements with respect to Zenyatta’s future plans, objectives or goals, to the effect that Zenyatta or management expects a stated condition or result to occur, including the expected timing for release of a pre-feasibility study, the expected uses for graphite in the future, and the future uses of the graphite from Zenyatta’s Albany deposit. Since forward-looking statements are based on assumptions and address future events and conditions, by their very nature they involve inherent risks and uncertainties. Actual results relating to, among other things, results of metallurgical processing, ongoing exploration, project development, reclamation and capital costs of Zenyatta’s mineral properties, and Zenyatta’s financial condition and prospects, could differ materially from those currently anticipated in such statements for many reasons such as, but are not limited to: failure to convert estimated mineral resources to reserves; the preliminary nature of metallurgical test results; the inability to identify target markets and satisfy the product criteria for such markets; the inability to complete a prefeasibility study; the inability to enter into offtake agreements with qualified purchasers; delays in obtaining or failures to obtain required governmental, environmental or other project approvals; political risks; uncertainties relating to the availability and costs of financing needed in the future; changes in equity markets, inflation, changes in exchange rates; fluctuations in commodity prices; delays in the development of projects; capital and operating costs varying significantly from estimates and the other risks involved in the mineral exploration and development industry; and those risks set out in Zenyatta’s public documents filed on SEDAR. This list is not exhaustive of the factors that may affect any of Zenyatta’s forward-looking statements. These and other factors should be considered carefully and readers should not place undue reliance on Zenyatta’s forward-looking statements. Although Zenyatta believes that the assumptions and factors used in preparing the forward-looking information in this news release are reasonable, undue reliance should not be placed on such information, which only applies as of the date of this news release, and no assurance can be given that such events will occur in the disclosed time frames or at all. Zenyatta disclaims any intention or obligation to update or revise any forward-looking information, whether as a result of new information, future events or otherwise, other than as required by law.