Released the results from test work performed in 2017, which resulted in a much-simplified purification process and a significant improvement in the total recovery of high-purity graphite from the Albany graphite deposit from 75.4 per cent achieved in the 2014-2015 testwork for the preliminary economic assessment (PEA) to approximately 90 per cent. 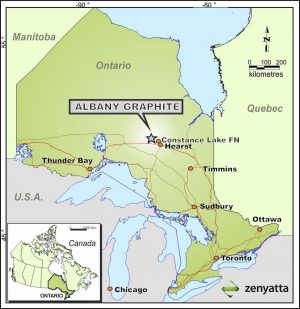 Zenyatta’s recovery of high-purity graphite up to 90%

Released the results from testwork performed in 2017, which resulted in a much-simplified purification process and a significant improvement in the total recovery of high-purity graphite from the Albany graphite deposit located near the communities of Constance Lake First Nation and Hearst, Ont. Recoveries improved from 75.4 per cent achieved in the 2014-2015 testwork for the preliminary economic assessment (PEA) to approximately 90 per cent.

This new process has lower energy and reagent consumption and also permits more efficient recycling of the leach solutions when compared with the original process developed for the PEA.

The company will be restarting its metallurgical testwork program for the Albany graphite deposit this month to collect engineering data for the next technical report. It is anticipated that this testwork will take approximately four months to complete. Laboratory investigations into the purification of graphite concentrate were suspended in August, 2017, due to lack of funds. This work will be conducted at SGS Canada Inc. (SGS), Lakefield, Ont., under the supervision of the Zenyatta’s metallurgist and project manager, James Jordan, PEng.

In April, 2017, Zenyatta reported that it had successfully completed the flotation pilot testing portion of metallurgical test work and the results indicated that at a target grade of 85 per cent graphitic carbon (Cg), flotation recovery was projected to be approximately 90 per cent. This program also provided ample material for the subsequent purification test work.

Mr. Jordan commented: “We are very pleased with the purification test work results to date and I am confident that we will be able to consistently produce a graphite product with a minimum 99.8-per-cent purity using a much-simplified and commercially viable process with significantly higher recoveries. The project will benefit environmentally from this new process due to significantly lower energy use and reduced waste generation.”

The goal of the latest round of purification test work was to develop a flowsheet which is more cost-effective than the PEA caustic (NaOH) bake/leach process, and deliver graphite product which is suitable for the emerging graphene and nanographite market. A further goal was to perform testing for the first time using a concentrate that is more representative of the entire Albany graphite deposit.

The first phase program investigated a process based on high-pressure caustic leaching of graphite concentrate followed by acid leaching. At this stage, the company’s objective was to determine the efficacy of the process in removing the bulk of impurities and not to produce any specific purity of product. It was concluded that a purity of 97.5 per cent Cg, representing 85-per-cent impurity removal, could be consistently achieved. This process has many similarities to the Bayer process, which is used commercially to produce alumina. Process conditions chosen for the tests were kept within industry-proven limits of temperature and caustic concentration.

The results are very encouraging with fast reaction time, relatively low caustic concentration and modest autoclave temperature/pressure. Acid leaching of autoclaved material is required to solubilise reaction products of the high-pressure caustic leach and hydrochloric and sulphuric acid were equally effective. Reaction time was again quite fast with low reagent concentration. It was also noted that the filtration characteristics were superior to that encountered in the bake/leach process.

Another primary objective in developing this process was to allow economical recycling of process solutions and the recovery of unreacted caustic soda. A series of tests determined that reacting autoclave leach solution with lime (CaO) was effective in removing impurities while regenerating caustic soda, indicating the ability to reuse the leach solution within the process. Additionally, removal of impurities from the acidic leach solution was performed by reacting with limestone (CaCO3) and lime, indicating the ability to recycle this solution as well. Locked cycle tests of a fully integrated circuit will be required to demonstrate that recycling is not detrimental and these tests will be part of the next stage of work to be performed at SGS.

The second phase of the work investigated three alternatives for upgrading ZPL product to a target purity of 99.9 per cent. These alternatives were a) second stage ZPL b) caustic bake/leach and c) acidic fluoride leach (ZHL). The second stage ZPL was tested at more aggressive conditions than used in the first stage and yielded best graphite purity of 99.3 per cent Cg. The caustic bake leach test using conditions developed previously yielded a graphite purity of 99.9 per cent. ZHL purification using a solution containing a mixture of ammonium fluoride (NH4F) and hydrogen chloride (HCl) yielded a minimum graphite purity of 99.8 per cent Cg. Chemical analysis of the resulting impurities varied for each of the processes with elevated aluminum in graphite purified using ZHL being the most significant difference.

A preliminary assessment of results, including several diagnostic leach tests, indicates that achieving a purity of 99.9 per cent Cg may be impractical and that ZHL is the most promising of the three alternatives. The process operates at 50 degrees, will require relatively simple equipment, and also has a low reagent and energy consumption. While the caustic bake/leach process yields a marginally better purity, its use as a second stage purification would suffer from the same deficiencies identified in previous work including a loss of approximately 11 per cent of the feed graphite, difficulty in recycling leach solutions along with high energy and reagent consumption.

James Jordan, PEng, is the qualified person for the purposes of National Instrument 43-101 and has reviewed, prepared and supervised the preparation of the technical information contained in this news release. SGS performed analyses of all purified Albany graphite samples by direct ash analysis using a platinum crucible, according to a validated method that also accurately quantifies key trace level impurities by subsequent inductively coupled plasma analysis.

Zenyatta’s Albany graphite project hosts a large and unique quality deposit of highly crystalline graphite. Independent labs in Japan, the United Kingdom, Israel, the United States and Canada have demonstrated that Zenyatta’s Albany graphite easily converts (exfoliates) to graphene using a variety of simple mechanical and chemical methods. The deposit is located in Northern Ontario just 30 kilometres north of the Trans-Canada Highway, near the communities of Constance Lake First Nation and Hearst. Important nearby infrastructure includes hydropower, natural gas pipeline, a rail line 50 kilometres away and an all-weather road just 10 kilometres from the deposit.