Announced that its synthetic HIV vaccine PENNVAX®-GP delivered via intradermal route demonstrated durable and robust antibody and T cell immune responses measured throughout the duration of the Phase 1 clinical study. 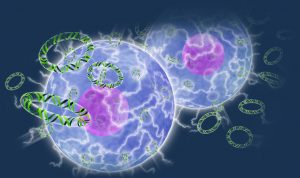 .
In this reported study, PENNVAX-GP plasmids were delivered intradermally or intramuscularly with CELLECTRA® device in healthy volunteers. More specifically, the study results demonstrated that PENNVAX-GP delivered intradermally (ID) with CELLECTRA generated equivalent or superior immune responses compared to the delivery via intramuscular (IM) route using the same delivery device, with ID delivery using only one-fifth of the dose compared to IM delivery.
.
These results are from a study supported by the HIV Vaccine Trials Network (HVTN) and the National Institute of Allergy and Infectious Diseases (NIAID), part of the National Institutes of Health (NIH) in collaboration with Inovio. The clinical and scientific data were reported at the Research for Prevention (HIVR4P) Conference held in Madrid, Spain by Protocol Chair of the HVTN 098 study, Dr. Srilatha Edupuganti, MD, MPH, Associate Professor of Medicine, Division of Infectious Disease, Department of Medicine at Emory University.

Dr. Edupuganti said, “These are exciting results for an early-phase HIV vaccine; the immunogenicity of the PENNVAX-GP vaccine is robust when given via the intradermal or intramuscular delivery methods but the intradermal was superior with respect to antibody responses. Intradermal vaccination may prove to be an important method of DNA vaccine delivery in the future.”

Dr. J. Joseph Kim, Inovio’s President & CEO, said, “We are truly pleased to see these robust and durable immune response data, which are among the highest ever responses we’ve seen with an HIV vaccine, and they are remarkably consistent with our other vaccine data reported from our Ebola, Zika and MERS clinical trials in terms of demonstrating nearly 100% vaccine response rates with a very favorable safety profile. Furthermore, our newer and more tolerable intradermal vaccine delivery device showed that we can elicit very high immune responses at a much lower dose. We look forward to further advancing PENNVAX-GP into later-stage clinical development with our partners and collaborators.”

The HVTN 098 trial is the first clinical study of PENNVAX-GP. The randomized, placebo-controlled multi-center study enrolled 94 subjects (85 vaccine and 9 placebo) to characterize and optimize a four-dose regimen of PENNVAX-GP DNA vaccine administered by intradermal (ID) or intramuscular (IM) administration in combination with a DNA encoded immune activator, IL-12 (INO-9012). Development of Inovio’s PENNVAX-GP vaccine, which widely targets multiple major clades of HIV — providing global coverage — has been funded through a five-year $25 million NIAID contract previously awarded in 2009 to Inovio and its collaborators. In addition, Inovio and its collaborators were awarded an additional five-year $16 million Integrated Preclinical/Clinical AIDS Vaccine Development (IPCAVD) grant in 2015 from NIAID.

Inovio previously reported that PENNVAX-GP elicited the highest overall levels of immune response rates (cellular and humoral) ever demonstrated in a human study by an HIV vaccine tested by the HVTN. In particular, PENNVAX-GP (plus IL-12) generated HIV-specific CD4+ T cell and binding antibody response rates close to 100% when delivered with either CELLECTRA® intramuscular or intradermal devices. For instance, 96% (26 of 27) of participants receiving PENNVAX-GP and IL-12 via the IM route demonstrated a CD4+ T cell response while the same percentage (96% or 27 of 28) of participants receiving the vaccine formulation via ID administration also displayed anti-HIV CD4+ T cell responses — even though those vaccinated via intradermal administration received 1/5th the total dose compared to those vaccinated via the intramuscular device.

Moreover, the samples from subjects followed for a full one year of the study showed that the immune responses were maintained in most subjects at month 12 (or six months after the last dose) as evidenced by the durability of vaccine-induced T cells as well as the magnitude of responder rates. Notably, the percentage of patients who had CD8+ T cell responses immediately after the last dose stayed the same or even increased slightly over the 6 month follow up period, clearly demonstrating durable vaccine-generated memory responses.

As of the end of year 2016 worldwide, nearly 35 million people had died from HIV-related causes and over 36 million were living with HIV then [UNAIDS (2018); WHO (2018)]. HIV is a retrovirus that causes acquired immunodeficiency syndrome (AIDS), a condition in which progressive failure of the immune system allows life-threatening opportunistic infections and cancers to thrive. HIV is classified into clades, sub-types within which the virus has genetic similarities. The most prevalent HIV-1 clades are B (found mainly in North America and Europe), A and D (found mainly in Africa), and C (found mainly in Africa and Asia) HIV-1 clade C accounts for 48% of worldwide and 51% of African-HIV type 1 cases. It is the most rapidly spreading subtype of HIV. Although highly active antiretroviral therapy regimens have dramatically transformed the treatment of the disease in developed countries, safe and effective HIV vaccines are needed to stop the spread of disease.

The HIV Vaccine Trials Network (HVTN), headquartered at Fred Hutchinson Cancer Research Center in Seattle, Wash., is an international collaboration of scientists and educators searching for an effective and safe HIV vaccine. The HVTN’s mission is to facilitate the process of testing preventive vaccines against HIV/AIDS. The HVTN conducts all phases of clinical trials, from evaluating experimental vaccines for safety and the ability to stimulate immune responses, to testing vaccine efficacy. Support for the HVTN comes from the National Institute of Allergy and Infectious Diseases (NIAID) of the U.S. National Institutes of Health (NIH). The Network’s HIV Vaccine Trial Units are located at leading research institutions in 27 cities on four continents. Internationally renowned HIV vaccine and prevention researchers lead the units.